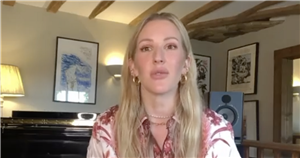 British singer-songwriter Ellie Goulding has spoken candidly about her mental health in her new book.

Ellie, 34, has spoken of suffering from ‘debilitating’ panic attacks and an exercise addiction at the height of her fame in her new book Fitter. Calmer. Stronger. that will be released next month.

The Love Me Like You Do singer shared an extract from the book in The Sun. She wrote: “My low days used to be ridiculously low. I just couldn't find a way out of them. I often felt as if I was failing because when I felt down I wasn't being productive.

“My voice, my music and writing will always be my mysterious, unpredictable, fiery friend for life.

“But even if I write something I love, I can't always rely on it to make me feel good. I often write my best songs when I'm feeling miserable.”

The singer opened up in the book about being thrust into the spotlight at the age of 24, after just finishing university. She described often feeling “complete euphoria and utter terror” in the same week.

She has also spoken out about how her sudden fame was like being “strapped to a space shuttle” as she could be travelling to “three different countries in one day” and have to attend endless award ceremonies as well as the added expectation of making TV appearances.

The Grammy-nominated singer acknowledges in the book how the opportunities she had were a “dream come true” but the whirlwind of it all resulted in the “debilitating" panic attacks that the star suffered at the height of her fame.

She candidly describes how she finally decided to get professional help and had therapy that proved to be “life changing”.

The star found fitness as her “sanctuary” as she started to recover from the panic attacks but soon became her “prison” as exercise became her way of controlling life around her and “distract herself from how she felt”.

Her mindset about exercise led Ellie to begin to eat poorly as she felt she could just burn off any extra calories with exercise.

Continued therapy allowed the singer to explore why she had the struggles she had in adult life and her parents’ divorce when she was young and “clashing massively with her stepfather” were some of the issues addressed.

Ellie has spoken in the book about being much happier now she is in her 30s and having faced her demons and adopted exercise as a way to manage her anxiety.

The mum of one is settled down now and welcomed her first child with art dealer husband Caspar Jopling in May this year, son Arthur Ever Winter.

To read more about Ellie Goulding sign up for OK!'s daily newsletter here.