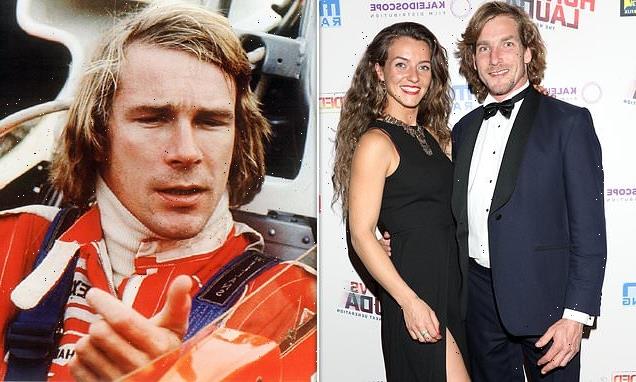 Being the son of F1 legend James Hunt may come with its perks, but fellow racing driver Freddie Hunt admits that living in his famous father’s shadow hasn’t always been easy.

‘It was hard at the beginning of my career being compared to my father and it caused major problems with my mental state,’ Freddie, 35, tells me at the premiere of his film Hunt Vs Lauda: The Next Generation at Soho’s Ham Yard hotel.

Hunt senior was rumoured to have slept with up to 5,000 women but Freddie remains committed to his entrepreneur girlfriend Aimee Watts.

And the man who has just joined Amazon’s Car And Country: Rush as a presenter, does advise sportsmen with a bevy of women admirers to be careful, ‘because keeping yourself on the leash is the hard part’. 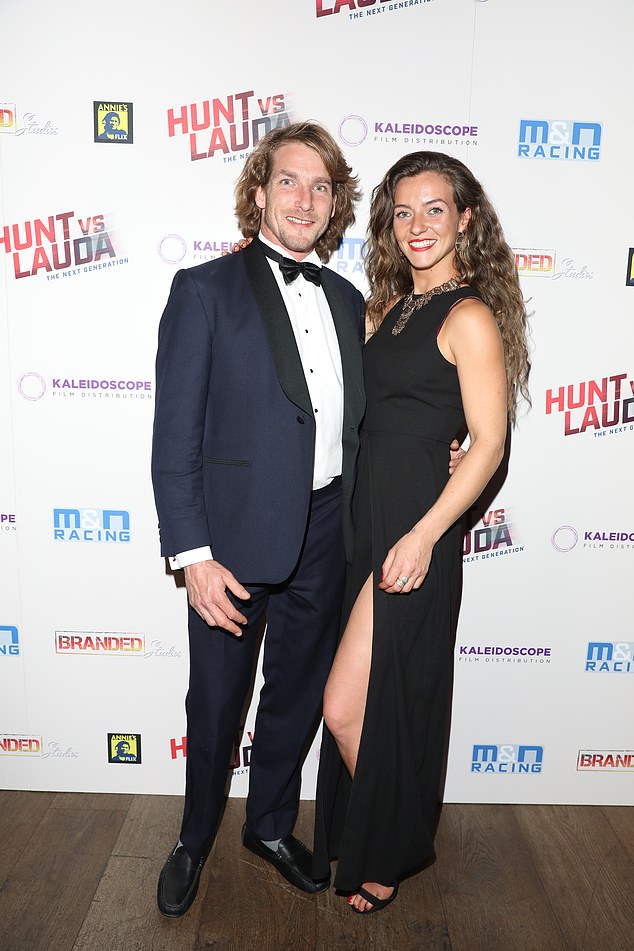 Being the son of F1 legend James Hunt may come with its perks, but fellow racing driver Freddie Hunt admits that living in his famous father’s shadow hasn’t always been easy 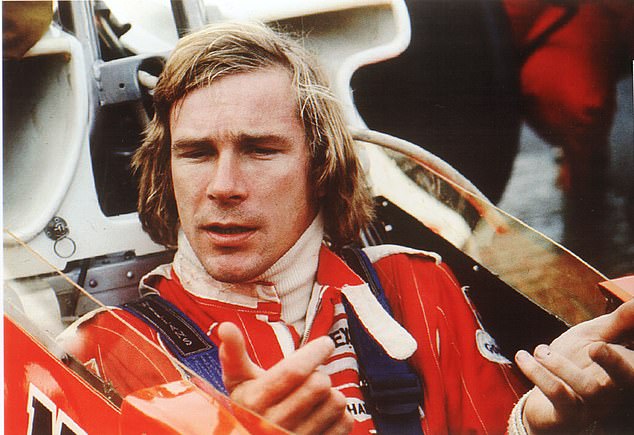 Hunt senior was rumoured to have slept with up to 5,000 women but Freddie remains committed to his entrepreneur girlfriend Aimee Watts

Former ‘face of Royal Ascot’ Martha Sitwell claims she has been stalked for the past few months by a mentally ill man with a history of strangling women.

The ex-wife of baronet Sir George Sitwell says that after the man approached her in the street and attempted to gain entry into her home she was left so traumatised that she now feels she has no choice but to move away.

‘I’ve had a stalker since April, and he’s out on police bail. He tried to break into my flat last weekend, but the police did nothing about it. They wouldn’t even come and take forensics,’ the 42-year-old tells me.

‘He’s a very mentally ill man who needs to be in hospital. I don’t know him, but he came up to me on the street. It was pretty scary, especially as I’ve heard he has a history of strangling women.’

Martha is seeking to raise enough money to relocate by selling some of her possessions via her Instagram account, including a pair of Crocodile Christian Louboutin shoes, the majority of the contents from her designer wardrobe, and even her wedding dress. 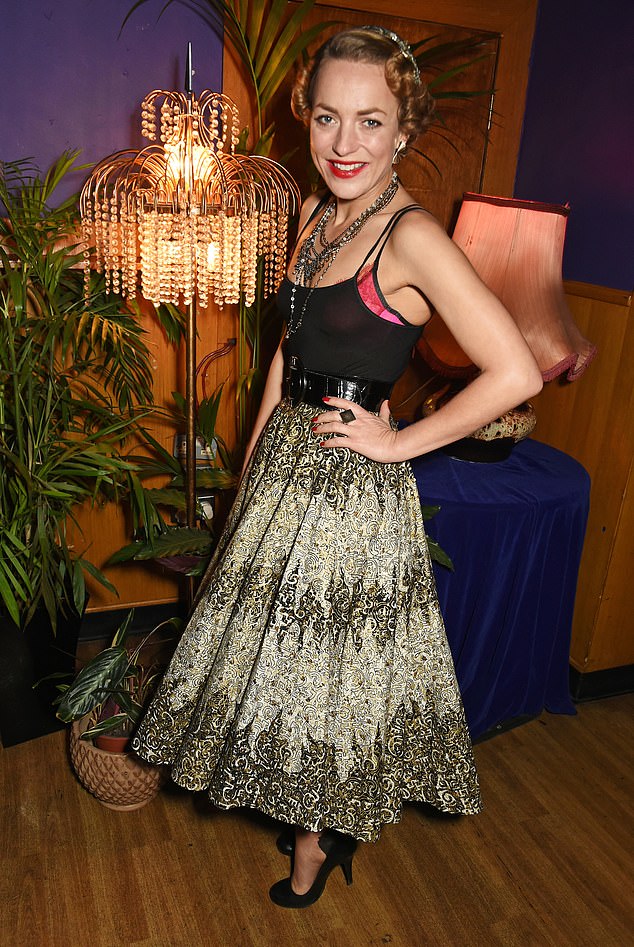 But in light of recent events, she’s grown wary of meeting potential buyers and letting them know where she is based.

‘I won’t be giving out my address to anyone. People can message me, and if I trust them I’ll send them my location,’ she adds. ‘Hence the move, and hence the massive clear-out. I’ll pay off my debts and move.’

But her relationship with the great-nephew of poet Dame Edith Sitwell turned frosty and she held a ‘divorce party’ in 2017 to mark the end of their ten-year union.

He may have been pushed to the margins of the Labour Party, which removed the parliamentary whip from him two years ago, but never underestimate the devotion former Labour leader Jeremy Corbyn inspires in his supporters.

Their donations, I can disclose, have paid off eye-watering legal fees of around £100,000 which Corbyn ran up as he prepared to fight a libel action — even though the case was eventually settled out of court.

Corbyn’s acolytes sent the cash to JBC Defence Ltd, a company established ‘to pay Jeremy’s legal cost if and when he is sued for defamation as a result of standing up for the values and beliefs to which he has devoted his life’, explains one of its directors.

All right for some.

If anyone based in leafy Surrey spots a strange-looking man running about in the witching hour, fear not — it’s just TV supervet Noel Fitzpatrick out for his very early jog.

‘I run between 12am and 2am. I don’t have a torch, I just feel the ground through my feet. It’s quiet and it’s just you and the universe,’ says the 54-year-old.

Sophie ditches heels (they were murder on the dancefloor)

Pop star Sophie Ellis-Bextor has decided high-heel fashion is no longer for her.

‘After the lockdowns I looked at all the heels and I thought “Why did I ever do that to my feet?” Stilettos, what was I thinking?’ says the 43-year-old mother-of-five. 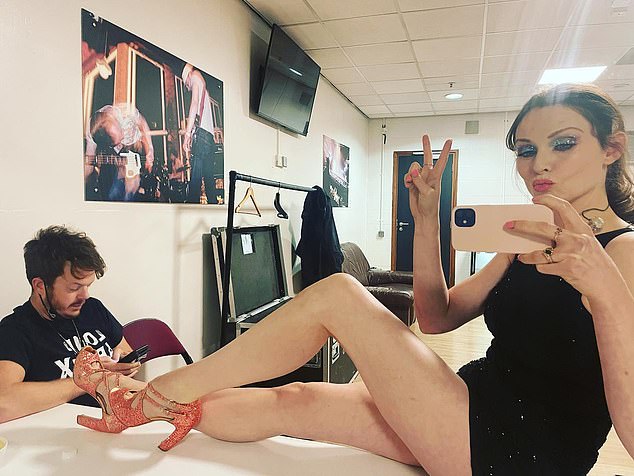 Dom Joly fooled countless people with his Trigger Happy TV series, but was he himself recently caught out?

A man known only as ‘Jim’ told Joly he wanted to make a ‘massive cinematic version’ of his show.

‘He told me he’d made loads of money in crypto,’ says Joly. ‘I agreed to meet for lunch. We got on really well. He was smart, charming and believable.’

A deal was signed and Joly waited for the money to roll in from the U.S., but soon realised he’d been had.

What he can’t fathom is ‘Jim’s’ motive for the stunt, since he paid for the lunch.

Jess Mills, daughter of the late MP and former Labour minister Tessa Jowell and David Mills, has released her first song with her new band, Do No Harm.

Mills, 41, previously performed as a solo artist but this is the first music she has released with a band.

The ditty, titled Damascene, was released last week and is the first of a trilogy of EPs that will come out over the next few months.

When I disclosed that Prince Harry’s ex-girlfriend Chelsy Davy had welcomed a baby boy at the beginning of the year with English hotelier husband Sam Cutmore-Scott, it came as a surprise to many.

Now the Duke of Sussex’s former flame, Zimbabwe-born Chelsy, 37, has shared the first picture of her son, Leo, who shares his blonde locks with his mum.

Chelsy, who runs a jewellery and travel business, gave birth to Leo at Chelsea and Westminster Hospital. She and Cutmore-Scott, also 37 — who was in the year above Harry at Eton — live in Chiswick, West London. 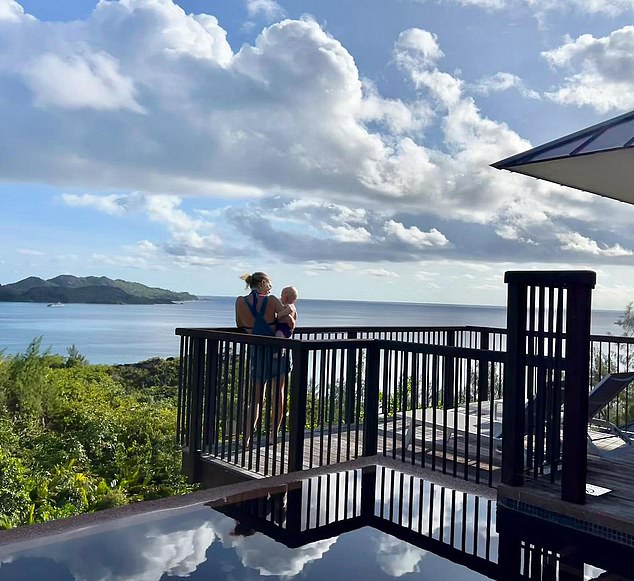 Now the Duke of Sussex’s former flame, Zimbabwe-born Chelsy, 37, has shared the first picture of her son, Leo, who shares his blonde locks with his mum

Strictly star Craig Revel Horwood is best known for his acerbic putdowns on the show, and it seems he’s equally judgmental when it comes to the viewing habits of his fiance, horticulturist Jonathan Myring.

‘He forces me to watch these ghastly shows, like 24 Hours In A&E and Ambulance,’ groans the choreographer, 57. Myring, 43, is training to be a paramedic.

‘I end up watching open brain surgery when I just want to relax after a day’s Strictly filming, darling.’

Might that be a factor in why the pair, who have been engaged since 2020, are yet to walk down the aisle?