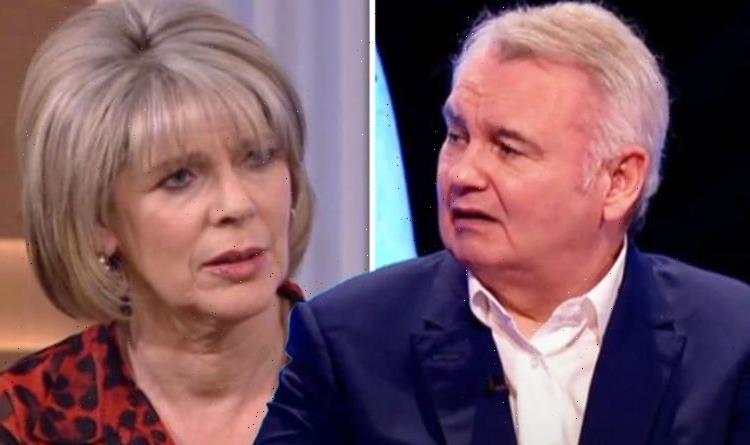 Eamonn Holmes who has battled “hideous” chronic pain after he suffered three slipped discs last year, has opened up about his fears for the future. The former This Morning presenter, who quit his role for GB News, revealed his concerns for his wife and former co-star Ruth Langsford.

The 61-year-old joked that he is fearful that his other half may end up being his carer.

The veteran broadcaster addressed his health woes in a candid new interview.

The GB News host explained that Ruth spent much of her time picking things up for him at the height of his chronic pain.

Eamonn shared that despite receiving treatment to help calm his pain, the presenter is hopeful that he will not require 24-hour care.

“I’ve had a hellish ten months with these dislocated discs on my sciatic nerve,” he told The Times.

“So I’m certainly not walking a lot this year, but I think just as you get older your appetite gets less.”

Eamonn explained that he often has physiotherapy and also has regular messages.”Always love that, ‘He’s going for a massage today?’ and all you do is squeal and yell. But chronic pain is hideous,” he commented.

The on-screen star admitted that during his illness he did have to reach out to his partner for her help.

But he cheekily shared that Ruth “has not got the most caring nature”.

He told the same publication: “The odd time during this illness I would say to her, ‘Could you put on my sock?’ or ‘Could you help me do this?’ and she’d say, ‘I’ll do it this once but don’t rely on this. I’m not going to be doing this again. I’m not your carer.'”

Eamonn added: “Yes, I do fear it. She hasn’t got the most caring nature, I have to say.

“So I’d better have enough money in the bank for a care nurse as I get older.”

Elsewhere, Eamonn also opened up about another health struggle he has faced – insomnia which is a difficulty with sleeping through the night.

It comes as the broadcaster has an early start time on GB News’ Great British Breakfast Show, alongside Isabel Webster.

Writing in his column for Best magazine, Eamonn said: “The early starts do take their toll, but knowing that you’re meeting up with one of your best friends, the work becomes much more fun and time tends to fly.

“The evenings can be a bit more difficult. My big dread about what’s ahead is insomnia and what feels like a ‘sleep hangover’ the next day.”

Eamonn began presenting This Morning in 2006, alongside Ruth, who had already been part of the ITV show’s on-air team since 1999.

His exit from the show came after the couple had their regular Friday slot handed to Alison Hammond and Dermot O’Leary last January, leaving them as just holiday cover for Phillip Schofield and Holly Willoughby.

Great British Breakfast airs weekdays on GB News from 6am.