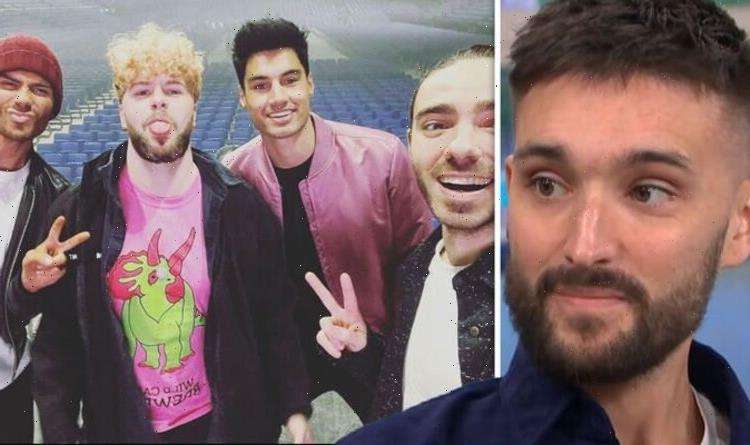 Tom Parker penned a touching tribute to The Wanted bandmates on Instagram before the singer’s death. Tom’s wife Kelsey Hardwick announced that her husband has died at the age of 33 in a heartbreaking post earlier today, two years after he was diagnosed with an inoperable brain tumour.

Just two days ago, Tom posted a snap of himself and his bandmates taken during their recent UK tour.

On the stage, Tom was sitting in the middle of the group and had Max George, Jay McGuinness, Siva Kaneswaran and Nathan Sykes sitting on either side of him.

Wearing sunglasses, the dad-of-two could be seen grinning from ear to ear as he sat down for the performance.

He simply captioned the snap: “Dream Team”, followed by a red heart emoji.

Earlier this month, Tom was seen sitting in a wheelchair in a picture shared by his bandmate Max after his cancer left him too weak to stand.

He appeared to be in good spirits as he wore a beanie and sunglasses while posing with a peace sign.

Max added Justin Timberlake’s SexyBack to the post with the caption: “I mean…come on,” with a heart-eye emoji.

Tom was forced to miss the first few shows of the tour due to a delay with the treatment he was undergoing in Spain, where he had been for several weeks.

While he was planning to be back in time for the first performance, Tom said “logistically changes with tests and results” meant he had to stay in Spain longer than he expected.

He broke the news on Instagram to his 276,000 followers, saying: “As most of you know, I’ve been out in Spain on a treatment programme for the past couple of weeks.

“It was only meant to last 20 days but due to a couple of logistical changes with tests and results, it won’t be complete until the end of the week now which has delayed our journey home.

“I’m obviously gutted that I’ll be missing the first few shows but as I’m sure you will understand, I have to complete my treatment cycle.

“I’ve been zooming into rehearsals all week and I know that the show will be incredible and that my boys will hold the fort until I’m back. Can’t wait to see you all very soon, hope you all enjoy the show,” he added.

Earlier today, Tom’s wife and mother of his two children, Kelsey, announced the devastating news that the star had died in an emotional tribute on Instagram.

She told her 142,000 followers: “It is with the heaviest of hearts that we confirm Tom passed away peacefully earlier today with all of his family by his side.

“Our hearts are broken. Tom was the centre of our world and we can’t imagine life without his infectious smile and energetic presence.

“We are truly thankful for the outpouring of love and support and ask that we all unite to ensure Tom’s light continues to shine for his beautiful children.”

Kelsey went on: “Thank you to everyone who has supported in his care throughout, he fought until the very end.

“I’m forever proud of you,” she finished the post, alongside heart and star emojis.

Since breaking the devastating news, Kelsey has since been inundated with messages of support from her followers.