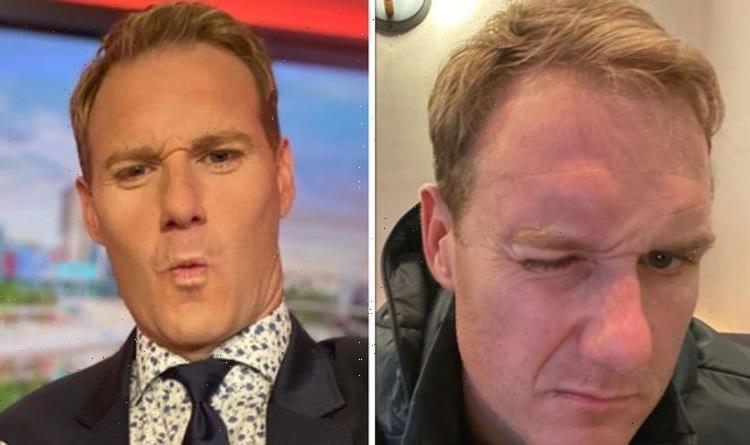 Dan Walker has opened up to his followers about an injury he suffered earlier tonight. The BBC Breakfast host admitted he’d done something “completely stupid” on his Instagram.

He explained how he’d ran straight into a giant glass door, leaving him with a very sore head.

Presenter Dan shared with his 209,000 followers a look at his nasty injury tonight.

The contestant in this year’s Strictly Come Dancing could be seen wincing with a red lump on his forehead.

Alongside the pic, he wrote: “I’ve done something completely stupid.

“I left my wallet in the taxi as I checked into a hotel.

“I ran back out to chase the driver and ran straight into a giant glass door which I thought was open.”

The broadcaster went on to admit fellow diners had gasped when he fell over.

He continued: “Full deck on the floor, gasps in the restaurant… lump on the head. Thankfully… I still remember the routine.

“I got the wallet back as the driver had stopped for a fag around the corner.”

“I’m sure @lisaarmstrongmakeup could use her fab makeup skills to turn it into a Strictly feature lump?!”

Other fans of the presenter also shared their support in the comments section.

While Elvie Diker urged: “Go and get it checked please.”

Dan is one of the celebrities taking part in this year’s edition of Strictly Come Dancing.

The breakfast news presenter will be joining the likes of Greg Wise, Adam Peaty and Judi Love on the show.

He began his training with his professional partner this week as he’s been keeping fans documented.

Speaking about this on Instagram, he teased: “First #Strictly training session after getting up at 3am this morning.

“Shattered but ABSOLUTELY LOVED IT!!!”

Viewers will only find out who Dan is paired up with in this weekend’s launch show.

Strictly Come Dancing begins on Saturday night on BBC One.