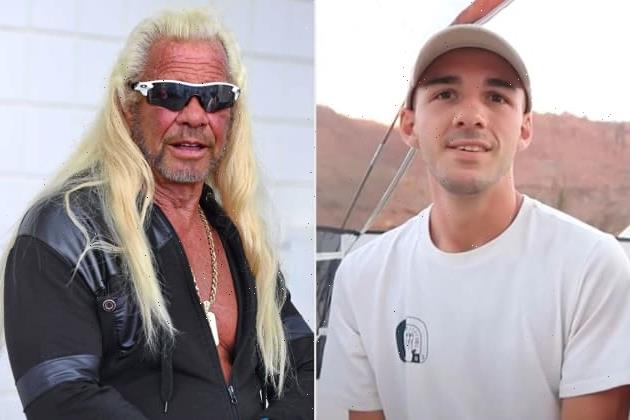 If a group of midwestern housewives aren’t already hosting a true crime podcast called “Dirty Laundrie,” they will be soon.

That’s because this situation is about to go from sad to bonkers, as the most wanted fugitive in America will soon be brought to justice by none other than the nation’s most feared bounty hunter.

Yes, the murder of Gabby Petito was a shocking tragedy, and it’s certainly nothing to joke about.

But the fact that law enforcement has failed to track down the only suspect in her case, and the job might be completed by our criminal justice system’s answer to Hulk Hogan?

Well, that’s about as hilariously ‘Murican as you can get!

Yes, folks, you really can’t make this stuff up.

According to a new report from TMZ, Duane Chapman — better known to one and all as Dog the Bounty Hunter — says that Laundrie is alive and well, and hiding out in order to evade capture.

The famed reality star/bounty hunter says he’s tracked Laundrie to a remote island, where he believes the suspect is hiding from the authorities.

“Earlier today we launched an active and specific search in a key area based on the intelligence we are receiving and researching,” Dog wrote on Instagram this week.

“Boat crews and ground teams have been called in and we have search and rescue dogs deployed. More to follow…”

While he only revealed his intention to nab Laundrie this week, it seems that Chapman has been hot on the suspect’s trail since early September.

On Instagram, Dog claimed that he almost caught up with Laundrie and his parents — who have apparently been funding his getaway — at a campsite where they had been hiding out.

Alas, just as he was preparing to hang them out to dry, the Laundrie Gang made a clean getaway.

“They were registered, went through the gate. They’re on camera. They were here,” Dog wrote earlier this week.

“We think at least if he’s not here right now, we are sure he was caught on camera as he went in the gate – that he was here for sure. Not over in the swamp,” he continued.

It seems that Dog has been receiving daily tips from his neatly 700,000 Instagtam followers.

“Thanks for all of your help! For those that have asked, we are cooperating with law enforcement as we always do,” Chapman wrote on his page.

“We will not reveal any information that will jeopardize the case.”

While there has thus far been no cooperation from the Laundrie family, Chapman says he hopes that will change soon.

“As of this post, we have NOT talked to the Laundrie family. We have NOT arranged to meet Brian Laundrie, though we’d welcome that,” he said.

“These rumors are the reason we decided to utilize our social media channels to share truthful information.”

Federal authorities issued a warrant for Laundrie’s arrest earlier this week, but the former YouTuber remains at large.

The search for Petito gained international attention in the weeks before her body was found, and now, the hunt for Laundrie is attracting a global audience.

We’re sure Dog doesn’t much care if he’s the one who tracks Laundrie down — just so long as someone finds him before the tense situation leads to further tragedy.