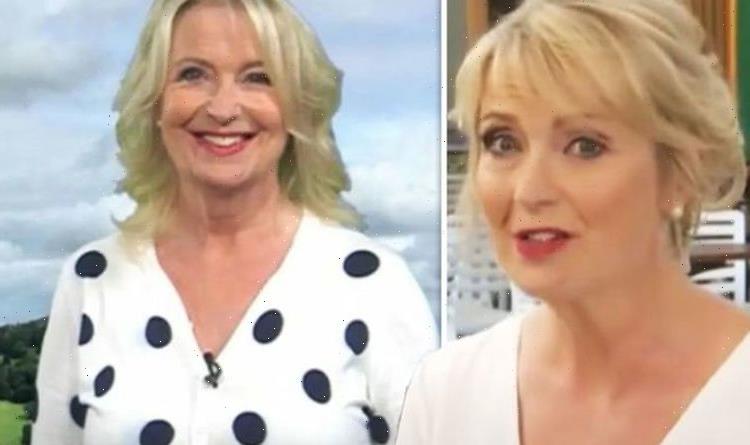 BBC Breakfast star Carol Kirkwood has taken to Twitter to reassure viewers that she “didn’t sleep in”, as she rushed to make her way to the studio on time. The Scottish weather presenter, 59, explained that she had been forced to do her hair and make-up herself due to traffic, before joking that Halloween hadn’t come early.

Have done my make-up and hair really quickly

In view of her 213,400 followers, the BBC host revealed that she very nearly missed her slot on the show.

She wrote: “Didn’t sleep in!

“Was sitting in my car for about an hour and a half due to an accident on dual carriageway (police stopped all traffic).”

The star went on to reveal that she was forced to forgo time in the hair and make-up chair, and instead attempted to do it herself.

Just hours later, Carol was among the first to congratulate her colleague Sally Nugent on her new presenting role on BBC Breakfast.

The announcement read: “We are pleased to announce Sally Nugent will permanently join #BBCBreakfast as a Presenter.

“Sally, an award winning journalist for 25 years, will join Dan, Naga & Charlie waking you up on the UK’s No. 1 morning show.”

The BBC have confirmed Sally is the new presenter from Monday to Wednesday.

She will join Dan Walker on the sofa while Naga Munchetty and Charlie Stayt will continue to take over from Thursday to Saturday.

Sally commented: “I’m absolutely thrilled to become the new presenter of BBC Breakfast and bring the nation the latest news, top entertainment guests and stories that matter every week.

“It’s an honour to take the reins from Louise and be part of the UK’s most-watched breakfast show.”

Sally is stepping in to replace Louise Minchin after she left the show earlier this year.

Earlier in the year, the latter addressed her exit to viewers, saying: “It will be, this year, 20 years since I first presented this programme.

“Since then I’ve felt part of a huge, enormous BBC Breakfast family which includes everyone who works here, everyone on the team and every one of you who watches the programme.

“I’ve loved being part of it but – there is a but – I’ve decided that is time that I stop setting my alarm for 3:40am.

“It’s not going to be for a while. But before anything else I wanted to thank everyone that is watching for your loyalty and your support over all those years,” she added.

Just days ago Louise announced that she is planning to release a new book based on the challenges women face in sport.

Teaming up with publishing house Bloomsbury, Louise announced the news that her book Adventures With Superwomen will be released in September 2023.