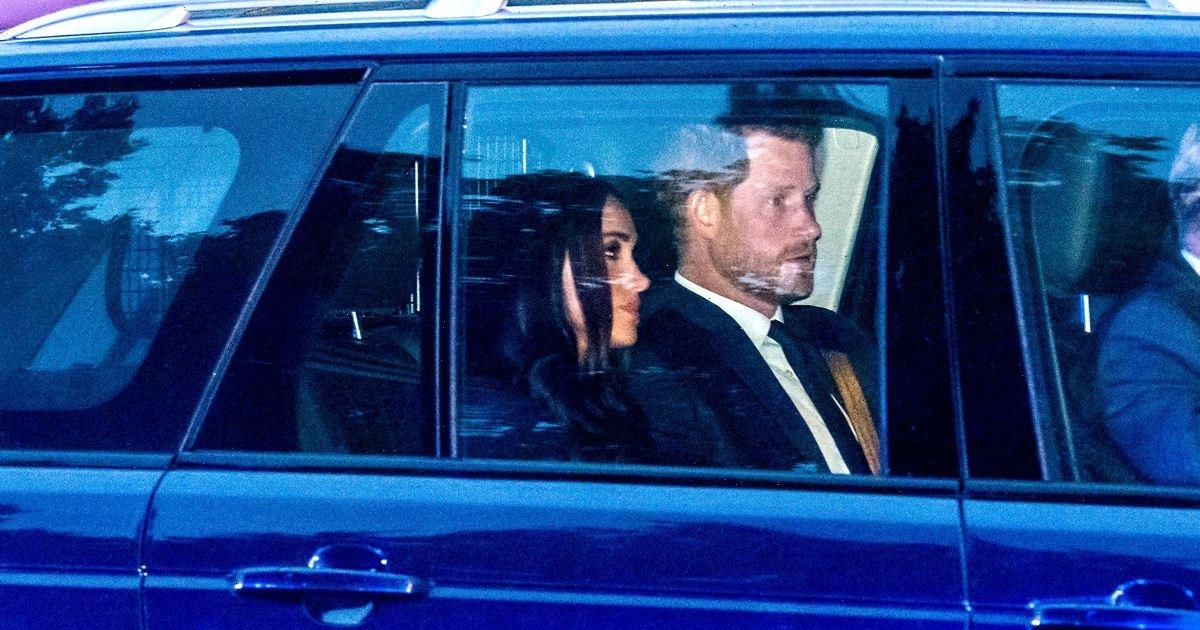 Prince Harry and his wife Meghan Markle were seen arriving at Buckingham Palace last night, as they reunited with the Royal Family to receive the Queen's coffin as it arrived there from Edinburgh.

Prince William, 40, and Harry, 37, will both support their father King Charles, 73, today during the procession of Queen Elizabeth II's coffin, which will be taken from Buckingham Palace to Westminster Hall, where it will lie-in-state.

Harry and Meghan have been seen putting aside their differences – if only temporarily – with the rest of the royals, including King Charles, Camilla, Prince William and Kate Middleton, in the wake of the Queen's death last week.

The Duke and Duchess of Sussex were seen being driven past the crowds outside Buckingham Palace on Tuesday evening, both looking solemn and wearing black as they prepared to receive the Queen's coffin with the rest of the family.

The weight of the past few days appeared to be bearing heavily on Harry and Meghan, who looked sombre as they both stared forwards.

For all of the latest updates, sign up for OK!'s Royal newsletter .

The royal family, including the late sovereign's children and grandchildren, spent last night bidding farewell to the late monarch, the first time they've had chance to grieve together privately since the Queen's death, aged 96 was announced on Thursday, 8 September.

The monarch died in Balmoral, Aberdeenshire, and her coffin was then transported to Holyroodhouse in Edinburgh before her children, King Charles, Princess Anne, Prince Andrew and Prince Edward joined in a procession to accompany it to St. Giles' Cathedral in the Scottish Capital.

There the Queen laid-in-state for 24 hours for people to pay their respects, before her coffin was flown from Edinburgh to RAF Northolt in London and driven to Buckingham Palace, where the much-loved monarch spent the night for the final time.

The Queen's coffin will today be moved to Westminster Hall, where it will lie-in-state until Monday 19 September, and hundreds of thousands, if not millions, of mourners are expected to come to pay their respects to the late Queen Elizabeth II.

Meghan and Harry joined the new Prince and Princess of Wales in a show of unity on Sunday as they greeted crowds and viewed floral tributes to the late Queen.

It was first time the foursome – formerly known as the 'Fab Four' – had been seen in public together in two years, following Harry and Meghan leaving The Firm in 2020 and subsequent "bombshell" accusations in their now-infamous Oprah Winfrey interview in 2021.

Prince William was said to have 'extended the olive branch' and invited Harry and Meghan at 'the 11th hour', and King Charles made a special mention to them in his first address to the nation as King.

He said: “I want to express my love for Harry and Meghan as they continue to build their lives overseas.”

This week, OK! celebrates the life of Her Majesty the Queen with a commemorative special in honour of Britain’s longest reigning monarch. Be sure to pick up your copy.