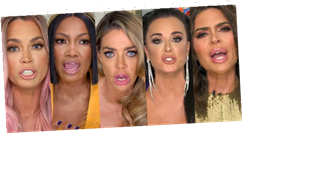 As hyped as fans are for the RHOBH finale, viewers have wanted to see the Reunion all season long.

That wait is nearly over, and as this teaser trailer shows, it’s Denise Richards vs the world.

“You guys are so vicious,” Denise accuses, seemingly of her entire cast of fellow Housewives.

“You really are,” she emphasizes. “It’s actually kind of mean.”

In her own panel, Denise appears stricken in that moment as her proven falsehoods come back to haunt her.

Lisa purses her lips in interest.

When Kyle Richards tries to insist that she does like Garcelle Beauvais, the latter cuts her off.

But the real mean comments have come, not from Kyle, but from Denise.

“You actually said you’ve said way worse things about me,” Teddi Mellencamp says, wanting to get to the bottom of Denise’s badmouthing.

A number of Housewives then reply in a cacophany of “you!” aimed at Denise.

Denise seems to challenge the other ladies, asking: “When was the last time we’ve ever talked about sex?”

Impatiently, Lisa points out: “You bring up your husband’s penis almost every show.”

There are, however, some moments of levity.

Andy Cohen admits: “I was confused about the quality of the steak at the stripclub.”

He is referring, of course, to how Denise calmed Aaron by telling him that they’d go to such a club and get a nice steak, which Lisa found to be absurd.

Kyle asks: “Where can you get a good steak and a good lapdance?”

“You’re going to let my small disdain for your clothes get in the way of our friendship?” Sutton marvels. “That’s silly.”

Everyone reacts with shock and amusement.

Having different fashion aesthetics is one thing. Saying “disdain” is another. Diction matters.

“You came to my charity event,” Kyle recalls, “raised your paddle, and pledged to donate $5,000.”

“What?!” Garcelle exclaims in shock and disbelief.

“I feel like you’re trying to discredit this,” Denise accuses Andy at one point.

He protests, explaining that, as the host, he’s “showing all sides.”

Erika Jayne correctly observes that he’s showing all sides “except Brandi’s side.”

She is not the only one who feels that Brandi Glanville should have been at the Reunion.

On the topic of BrandiGate, Lisa expresses: “I feel that the cover-up is worse than the crime.”

To be clear, she’s not being literal — neither cheating nor a bi fling are “crimes” in the US. She just resents the lying and desperation.

“If you want to play this game,” Denise appears to threaten, “we can do it.”

“Are you threatening me?” Lisa demands to know.

Garcelle accuses of Lisa: “All you do is attack her every time you see her!”

Dorit, who is being very sweet about this whole thing, says: “I don’t think Denise is trying to make anyone look like assholes.”

Erika very frankly points out: “She already did.”

At another point, while the other ladies talk over each other, Lisa chants “gas lighting, gas lighting” while snapping her fingers.

“The whole world knows about Denise’s husband going and getting a happy ending from like a hundred-year-old woman,” Lisa announces.

Dramatically, Denise storms off, confirming that the look that she has been sporting this whole time has been less “glam” and more “nightgown.”

There’s no stage to march off of, so she literally just gets up and moves off camera.

This looks like a huge mess, and we’re sure that this is barely a taste of the drama to come.