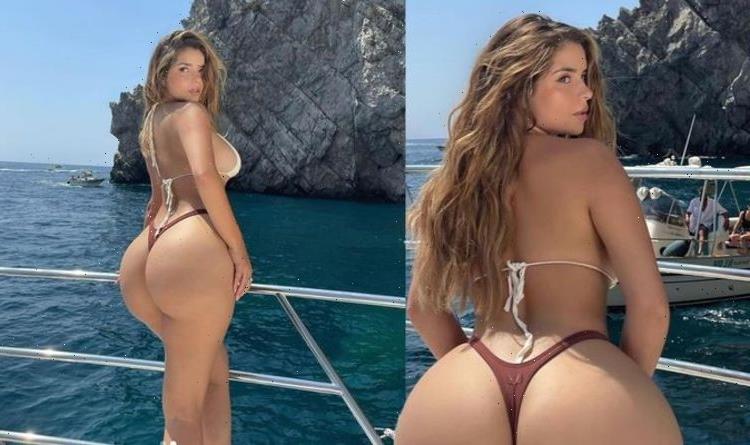 Demi Rose, 26, whipped her fans into a frenzy as she stripped down to a very small bikini while topping up her tan on a boat in Capri, Italy. The model sent pulses racing with raunchy snaps that she posted on to Instagram yesterday evening, with the ironic caption: “Innocence.”

Demi showcased her impressive physique in the two-piece set – which featured brown thong bottoms and a white bikini top.

The star’s tiny waist was on full display in the snaps, with her glossy brunette tresses tumbling down her back.

Demi gave a sultry gaze to the camera as she looked over her shoulder, appearing to sport a naturally glowing palette of makeup.

In a second snap, the model sat down on the front deck of the boat as she took in the stunning coastal views.

Her fans gushed over the racy photos as they declared her an “angel”.

And @Its_mario23 remarked: “The view,” alongside a flame emoji.

During Demi’s journey to Italy this week, her huge fanbase were treated to many angles of her incredible body.

A recent photo showed the star draped over a balcony wearing a body-hugging black corset, with the stunning backdrop of the Amalfi Coast behind her.

Her long brunette tresses were styled in loose curls with a hair stand over her face.

In another snap, she almost spilled out of a very low-cut bodysuit

To the satisfaction of her fans, the model skilfully covered her nipples in the barely-there number.

The Birmingham beauty has been modelling for the last eight years and credits her career as a “blessing”, after being subjected to bullying when she was younger.

Speaking to Radio 1 Newsbeat, Demi previously revealed: “I always wanted to get into modelling and when I eventually got there I classed it as a blessing, because I grew up being bullied and didn’t have many friends at all.”

In 2019, both of Demi’s parents died just seven months apart and the star said going into lockdown straight after their deaths was “a time of reflection”.

She said: “Having to deal with my parents’ house and selling their stuff – it was a really sad place for me.

“I wanted to go and travel but I had three months in London, which was a lot of facing what I had been through and was a time of reflection.”

Her latest shoot comes after she was seen teasing her OnlyFans page to her Instagram followers, after signing up to the content-sharing platform.

Demi told fans she was ditching her profile’s subscription fee for a limited period.

OnlyFans is an online platform, that allows public figures to charge fans a fee to their profile, where they often share pictures and videos.