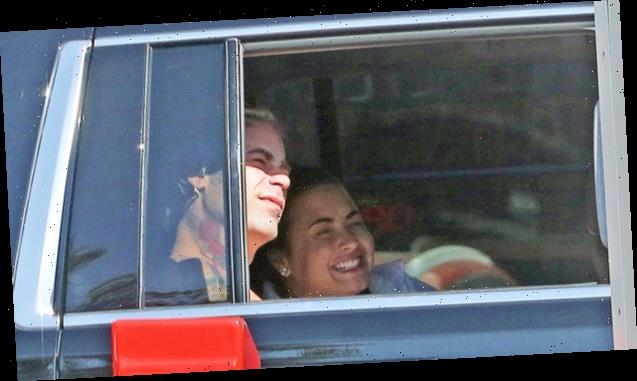 Just three weeks after her split from Max Ehrich, Demi Lovato was photographed out and about with another familiar face, Mod Sun, who used to date Bella Thorne.

Demi Lovato seems to be enjoying herself after ending her engagement to Max Ehrich in September. On Oct. 14, the singer was photographed hanging out with Mod Sun. They hit up In-N-Out together, and were then pictured getting into the same car. Demi had a huge smile on her face as she cozied up next to the rapper inside the vehicle.

It’s unclear whether something romantic is going on between these two, but they’ve known each other for quite some time now. Both stars have been open about their struggles with addiction, and Mod Sun credited Demi with helping him with his sobriety journey. He has been sober since the beginning of 2019. Meanwhile, Demi relapsed after six years of sobriety in 2018 and suffered a near-fatal overdose. She has been working hard to maintain her sobriety ever since.

Earlier this year, Demi kicked off a whirlwind romance with Max. Right after they got together, the coronavirus lockdown hit the United States, and the relationship moved at lightning speed as they quarantined together. Max proposed in July, but Demi broke things off by the end of September. Since then, she has been extremely quiet about the split, aside from releasing one song about it.

Max, on the other hand, has been very vocal about his feelings post-breakup. He claimed that he didn’t even know the relationship was over until he read about it “in a tabloid,” and accused Demi of using him as a “PR stunt.” However, Max seems to be moving on, as well. On Oct. 13, he posted a photo of himself out and about with singer Sonika Vaid, who previously competed on American Idol.

As for Mod Sun — he famously dated Bella Thorne for more than a year in 2018 and 2019. During their relationship, they even “got married” with a wedding ceremony, although Bella later confirmed that it was not a legal marriage. The two split in April 2019, and things did not end on good terms between them. Bella has since moved on with Benjamin Mascolo.