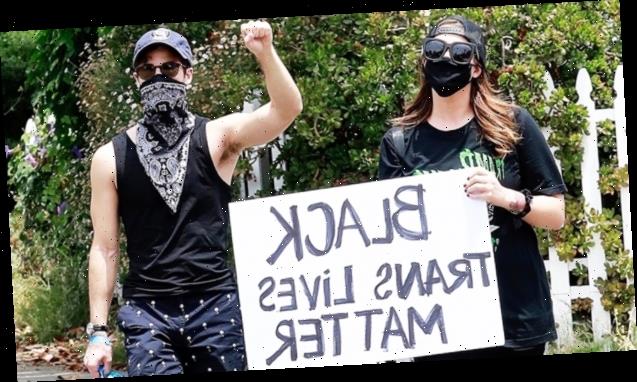 Darren Criss and Mia Swier took to the streets of Hollywood to call attention to an often underrepresented group in the LGBTQ community: black transgender people.

Amid all the signs at the protest against George Floyd’s death in Hollywood on June 2, one especially stood out: “Black Trans Lives Matter.” This was the sign that Hollywood star Darren Criss, 33, and his wife Mia Swier (who’s also a director and producer) held while marching alongside the many other people in support of the Black Lives Matter movement. To show his solidarity, Darren raised his air in a fist, which has become the new universal symbol to fight police brutality.

It was important for Darren and Mia to use their public profiles to highlight black transgender lives, especially as violence against the transgender community has been an increasing area of concern. The sign also served as a reminder that June is Pride Month, and to celebrate and call for the protection of people of color within this community. Mia also directed onlookers’ attention to the Black Lives Matter movement in general with another sign that read, “Black Lives Cannot Be Replaced!”

Darren and Mia wore nondescript clothes while calling for justice after Minneapolis police officer Derek Chauvin pinned George to the ground with his knee, after the officer and three others had arrested the unarmed black man on suspicion of allegedly using a counterfeit $20 bill (which has not been proven) on May 25. George died from “asphyxiation from sustained pressure” and was found “dead on the scene,” which attorney Ben Crump reported in a statement to CNN. A bystander filmed a video of George pleading “I can’t breathe” while the officer brutally pressed against the father’s neck. The officer has been fired and charged with third-degree murder and second-degree manslaughter.

Darren, who is also known for his roles on American Crime Story and American Horror Story, has also been vocal on Twitter since George’s death. On May 29, he shared a link that listed ways to help the BLM movement. “I definitely don’t have the answers. I’m looking for them every day and constantly learning from people much wiser than myself as I try to make sense of it all… But as I do that, I hope that you will join me in taking heed, taking heart, and taking whatever action you can to add constructively & compassionately to this movement (not to mention SAFELY during this pandemic!),” the actor wrote in a series of tweets.