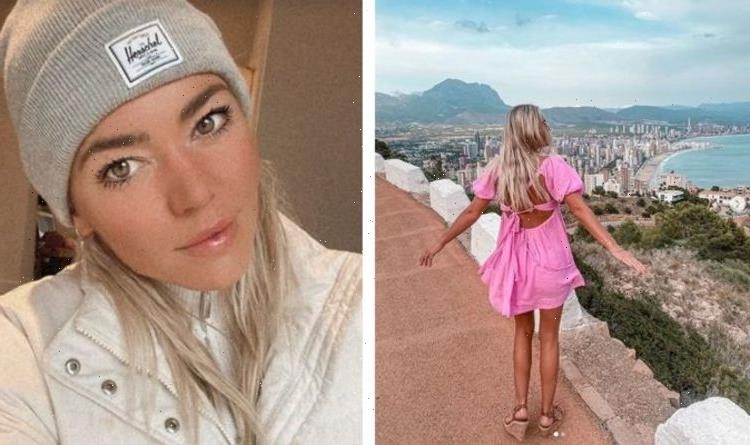 Channel 4 presenter Danni Menzies has been a favourite of A Place in the Sun fans since she first arrived to showcase exotic property locations six years ago. However, following a “huge obstacle”, it has emerged that she will now be hanging up her summer dresses and looking for projects closer to home.

When she returned to the UK on a Ryanair flight yesterday after what had been believed to be her last filming session for the show, she posted on Instagram boasting of her “Friday feeling”.

In fact, the bitterly cold temperatures of another British winter – including high winds and storms in some areas – seemed not to faze the 32-year-old beauty at all as she focused on staying nearer to home in the future.

Addressing the speculation that this could be the end of her long stint on the show, she clarified in an official statement made to Express.co.uk: “After six years on the show and about a hundred shows filmed I’ve decided to hang up my summer dresses.

“The show has been such a huge part of my life and I’d just like to thank and send love to all of the wonderful people I’ve met on this journey who made it so special.”

She added: “A huge thank you also to the incredible team at Freeform Productions who I have never appreciated more than the last two years as they kept the show on the road despite the fact that covid made travel a huge obstacle. What a team!”

Ever since the first lockdown in March 2020, there had been enormous challenges placed on Danni as she struggled to achieve the freedom of movement she needed to continue travelling abroad for filming.

Although the pandemic finally seems to be receding after almost two years of restrictions, Danni has nevertheless decided to quit the show anyway and start afresh.

Channel 4/Freeform Productions also made a statement on her departure, explaining: “After six years on the show Danni has decided to move on.

“We would just like to thank her for all the incredible work she has done. We wish her the best of luck for the future.”

However, viewers can nevertheless look forward to her friendly face appearing on screen for quite some time to come, as her pre-recorded episodes are likely to run up to 2023.

The latest series of the show has just begun, and Danni has released promo pictures of herself glammed up in a candy pink summer ruffle dress from Free People while standing by a magnificent coastal skyline to kick off the proceedings in Benidorm.

‘How much are you paying him?’ Prince Harry called out by Piers Morgan [DEBATE]

Fans were delighted at the prospect of daydreaming their way to sunny Spain via the new series, not to mention seeing Danni herself, with one Instagram follower, @robmck79, making ample use of the fire emoji and quipping: “Hottest tv presenter in the world!”

Meanwhile, @pollydunseath praised her outfit: “So pretty in pink.”

On her Instagram Stories, however, Danni appeared glad to be back in the UK, posting photos of a meal she’d prepared alongside the phrase “Home comforts” and posting footage of her dog with his favourite tennis ball.

This morning she caught up with family and friends, tried out some yoga poses for the camera for the first time in a long while and cradled her dog in her arms, enjoying being back.

She also joked that she was “in all the clothes” again, sporting a woolly winter hat to demonstrate the drastic temperature change.

Danni’s love of dogs and animals generally is clear from her background – her parents own over 20 horses and a riding school, while she has grown up around canine and equine companions.

She’s expressed her desire to take on a TV role involving animals – possibly rescue dogs – in the future, so fans will have to keep an eye out for new developments in the next chapter of her career.