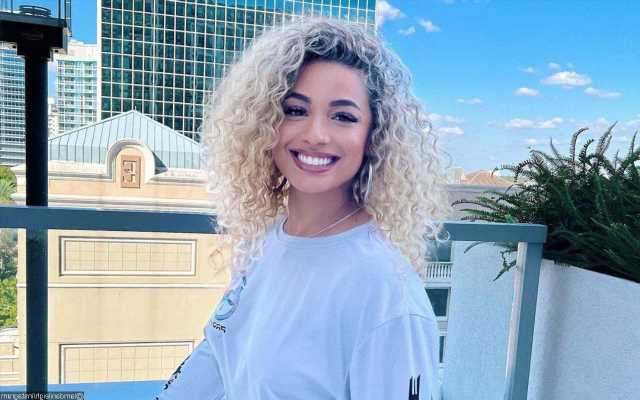 The ‘In My Feelings’ artist previously informed her online devotees that she has unfollowed everyone on the photo-sharing platform because she wants to ‘focus’ on herself.

AceShowbiz –DaniLeigh has responded to the Internet chatter surrounding her private life. Hours after declaring that she has unfollowed everyone on Instagram, the “Easy” singer took to Twitter to laugh off people’s assumptions about her.

“Internet funny asf w the narratives they come up with and truly believe,” so the 26-year-old musician penned on the blue-bird app. She also added a crying laughing emoji.

Prior to sharing the post, DaniLeigh turned to her Instagram Story to announce that she has cleared her unfollowing lists on the photo-sharing platform. Alongside a selfie, she declared, “Sorry I had to unfollow everyone to focus on myself.”

After sharing the announcement, some fans believed that the “Lil Bebe” songstress was having a problem with her former boyfriend, DaBaby. “She seen dababy n dababymama together,” one person opined, while another commented, “She must’ve seen DaBaby on MeMe’s story.”

This came after DaniLeigh opened up about her pregnancy and her delivery process. During a Q&A session on her Instagram Story in October, she explained, “6 pushes she was out. Epidural had me laughing w my [baby daddy] whole time … was really amazing [white heart emoji][praying hands emoji].” DaniLeigh didn’t identify who her baby daddy is. However, many speculated that he is the “Ball If I Want To” hitmaker.

DaniLeigh, who reportedly gave birth to her baby girl on August 11, also gushed about how her life has changed since becoming a mother. “That’s my blessing … Never has someone need me like her. I’m more focused on building my business for me and my lil bebeee,” she raved.

The “In My Feelings” artist went public with her pregnancy in mid-July following months of speculation. At that time, the then-expectant mom treated her Instagram followers to a series of stunning maternity photos which were taken in the Dominican Republic.