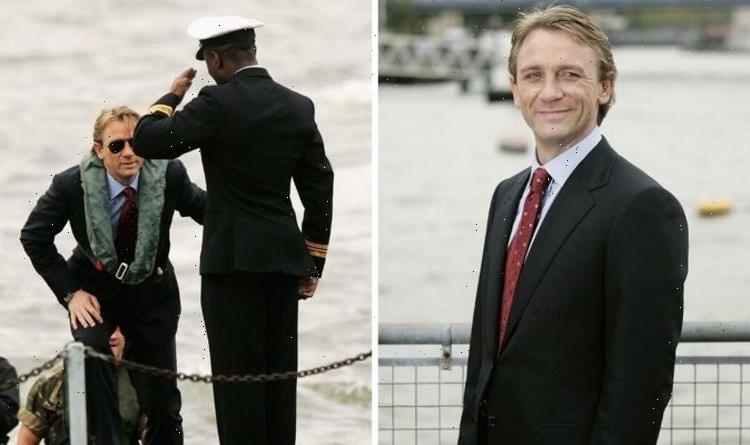 Daniel Craig makes his fifth and final outing as James Bond later this month as No Time To Die finally hits UK cinemas. After 15 years in the role, the 53-year-old waves goodbye as his time as 007 comes to an end. Fans were originally told No Time To Die would be released in November 2020, then April 2021, then November 2021, before its release date was finally confirmed for September 30 2021 in the UK.

In the documentary Being James Bond, which is currently streaming for free on Apple TV+, Craig bids farewell to the cast and crew.

He told them: “A lot of people here worked on five pictures with me, and I know there’s a lot of things said about what I think about these films or all those whatever.

“But I’ve loved every single second of these movies, and especially this one, because I got up every morning, and I’ve had the chance to work with you guys.

“And that has been one of the greatest honours of my life.”

But it hasn’t always been plain sailing, literally as well as metaphorically, for Craig during his time as 007.

He was unveiled as the man to replace Pierce Brosnan in true Bond style, ahead of the 2006 release of Casino Royale.

In October 2005, he arrived at HMS President on London’s St Katharine’s way on a Royal Marines speedboat.

The boat sped under Tower Bridge and moored at the President jetty, where Craig was introduced to the media as the new Bond.

The Daily Mail wrote in 2008 how he was “unveiled as the supposedly all-action and rugged new James Bond”.

But, they added, he was “dressed awkwardly in a life jacket and looked distinctly green around the gills”.

As the pictures show, Craig wasn’t blessed with the best of British weather and had to contend with a rather gloomy day for his special occasion.

David Stillo wrote in the BBC at the time: “007 can’t come to a media conference on a bus. So they put him on a small boat in a rather chic blue life jacket and dark glasses.

“It was supposed to look glamorous but London’s unforgiving grey skies and even greyer water made it all look just a bit uncomfortable. And he admitted he was a bit scared out there but that was nothing to meeting the media.”

Meeting the media didn’t get much better either, since Craig has always been keen to keep his private life private and much was known about the new film. Casino Royale was largely based on the original Ian Fleming novel.

Mr Stillo recalled some of the conversations at the press conference: “Daniel, are you going to stay blond?”

Joanna Lumley on the possibility of a female James Bond

“Have you practised the famous lines?”

The pinnacle of the press conference, Mr Stillo wrote, was Craig telling the journalists that he had celebrated landing the role by having a martini.

Despite the awkwardness of the initial meeting, Craig has gone on to be immensely successful as 007.

His four outings have so far grossed £2.65 billion. Should No Time To Die rake in more than £920 million or more, he will surpass Sean Connery as the most successful 007 star.

Widely viewed as the first major release since the ongoing coronavirus pandemic forced cinemas to close, No Time To Die premieres at the Royal Albert Hall on September 28.

Among the attendees will be the Prince of Wales, the Duchess of Cornwall and the Duke and Duchess of Cambridge.

Even if the box office prize alludes him, Craig can lay claim to a number of records during his time in the hot seat.

According to the Daily Mail, he has travelled the furthest — 71,064 miles, 739 more than Roger Moore,

He has also drunk the most alcohol on screen — 85 units, two more than Moore.

Craig also holds one rather unfortunate record — four of his seven love interests have ended up dead.