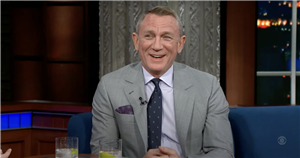 Daniel Craig may be an American citizen now, but there are still a few traditions he’s learning to love. In a Nov. 21 appearance on “The Late Show with Stephen Colbert,” the “Glass Onion” actor revealed that despite celebrating Thanksgiving for years now, there’s one holiday side dish that continues to baffle him: stuffing. The conversation started innocently enough, with Craig giving cranberry sauce his stamp of approval, but things veered into debate mode when Colbert asked for his opinion on stuffing. “I think it’s an abomination,” he admitted, causing an immediate uproar from the studio audience.

“Have you seen English food?” Colbert retorted. “You guys have savory puddings! I will not take culinary critique from a country that has a kidney pie.” Craig’s biggest gripe with stuffing is mainly in its preparation, seeing as the herby bread pieces are “stuffed up the a**” of a turkey before cooking in the oven, as he so eloquently described. “I think it should be cooked separately. It’s good, but I don’t think you should bring it anywhere near the bird,” Craig continued.

Colbert valiantly tried to get Craig to come around and reconsider his firm position on stuffing, but the “No Time to Die” star still insisted it was “too complicated” for him to get behind. “It’s too complicated to put wet bread inside a bird?” Colbert asked, voicing what all stuffing-lovers might be thinking. But even the late-night host was willing to concede that it can be a strange food to cook, saying, “I will admit that it feels disturbing when you’re doing it, if you’re doing it right.” Watch the full video above and let us know where you stand on the great stuffing debate of 2022.