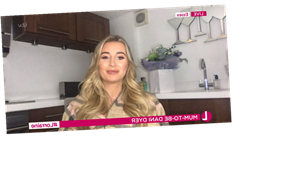 Pregnant Dani Dyer has revealed her dad's key piece of advice on parenting.

The 24 year old appeared on ITV's Lorraine on Wednesday morning to talk about her new podcast before answering questions about her unborn child, who is due in January.

Christine Lampard, 41, who is filling in for Lorraine Kelly, asked the former Love Islander what her 43 year old EastEnders star dad Danny's advice is for taking care of a child.

Dani replied: "You know what he thinks it's funny, he's like, 'I can't believe I'm gonna be a grandad,' he's like, 'I'm glad I ain't gotta do the night feed or anything.'

"But he really is like you just learn it on the job. You know I don't feel like you know what you're doing until you're actually doing it.

"So he really is excited for me. He's like, 'Listen Dan, as long as they're fed and you're giving them loads of love, you'll be fine.'"

The reality star went on to explain that her mum Joanne, also 43, has decided to move in with her to help take care of the baby.

She said: "So we was meant to convert the spare room into my own little dressing room. But she's like, 'Oh no, we're gonna keep the bedding there, I'll have a picture up there, I'll have my sign up there…'