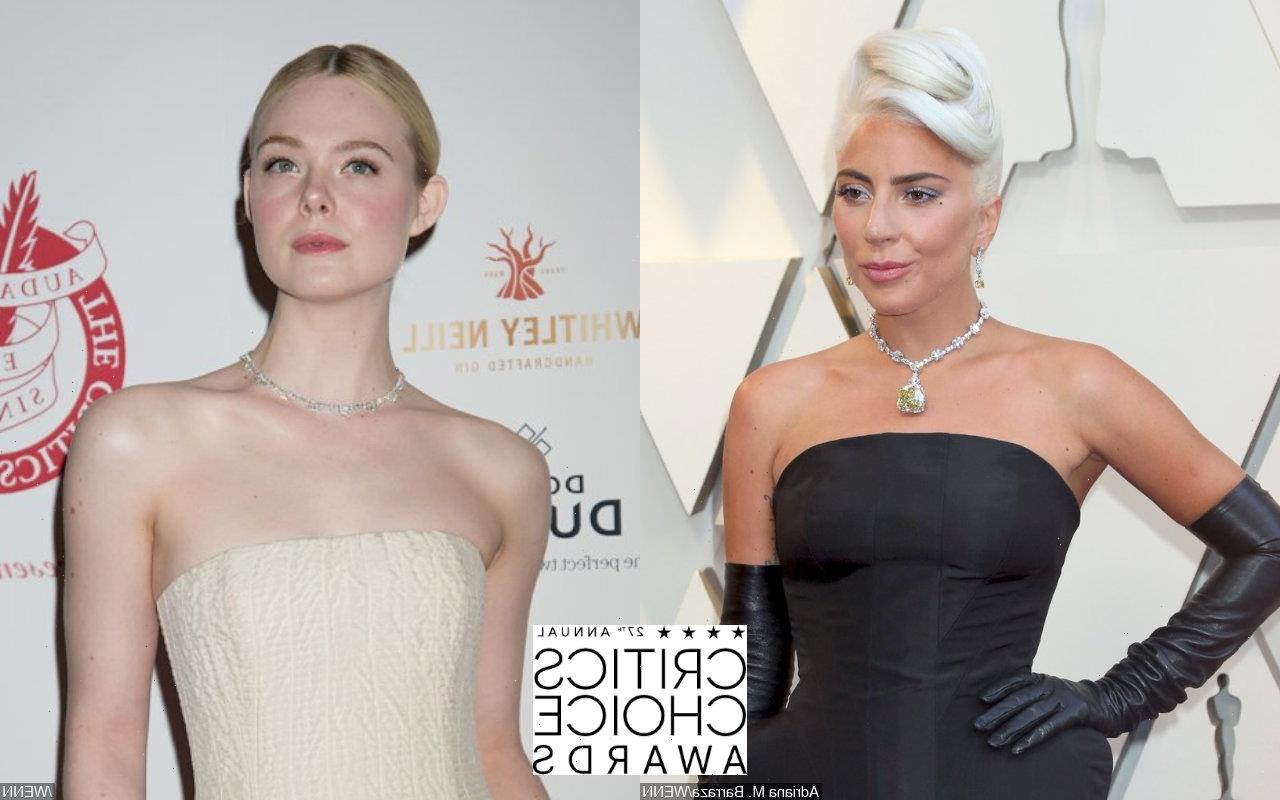 Selena Gomez, Kristen Stewart, Halle Berry and ‘Squid Game’ favorite Jung Ho-yeon are also among celebrities who turn heads at the award-giving event, which is held in Los Angeles.

AceShowbiz -Celebrities are making a stylish entrance on the red carpet at the 2022 Critics’ Choice Awards at the Fairmont Century Plaza Hotel in Los Angeles on Sunday, March 13. Among those who turned heads at the award-giving event are Lady GaGa, clad in a dramatic plunging dress, and Elle Fanning, who glitters in a gold ball gown.

Meanwhile, Elle glittered in gold at the annual event. The “Maleficent” actress, who slicked her hair down in a low ponytail, looked stunning in a strapless gold ball gown by Oscar de La Renta. To complete her look, she wore stud earrings and a thick gold bracelet.

Also bringing style to the star-studded event was Selena Gomez. The Mabel Mora depicter on “Only Murders in the Building” hit the red carpet in a custom red silk Louis Vuitton halter neck dress with a matching long scarf that served as a train. She paired the gown with a statement arrow earring.

Another star showing her best style at the event was Kristen Stewart. For the night, the actress, who was up for Best Actress for her role in “Spencer“, donned a slinky silver dress. She went all out with her hair, styling it into glam waves.

In the meantime, Halle Berry walked the red carpet with her “X-Men” inspired hairstyle. She rocked a partially shaved and bleached style similar to what she wore when she played Storm in the film. She paired her bold hairstyle with a sleek black velvet Dolce & Gabbana suit over a white corset.

Also gracing the red carpet with a unique look was “Squid Game” star Jung Ho-yeon. The South Korean actress arrived at the night event wearing a metallic beaded dress from Louis Vuitton. The dress featured a loose-fitting bodice paired with a sculptural bustle skirt embroidered with crystals and silver beads. She paired the look with earrings and a ring from Louis Vuitton’s High Jewelry Collection.

Other stars showing up at the event with their best styles were Will Smith and his wife Jada Pinkett Smith, Kirsten Dunst as well as Serena Williams. Will, who was nominated for his role in “King Richard“, looked dapper in his brown suit as he walked arm-in-arm with his wife Jada, who wore a gold dress.

Kirsten looked pretty in her simple baby blue gown. In the meantime, Serena turned heads in a silver gown with a long, flowing train that trailed behind her as she posed on the red carpet of the annual show.

The 27th annual awards show is being co-hosted by Taye Diggs and Nicole Byer. The event was originally scheduled to occur on January 9 but was postponed due to the surge in COVID-19 cases due to the Omicron variant.

The new date, however, conflicts with another major awards show, the BAFTAs, which took place on March 13. Though so, it’s reported that the CCAs and BAFTAs have been in communication over the issue and have a mutual understanding amongst one another.