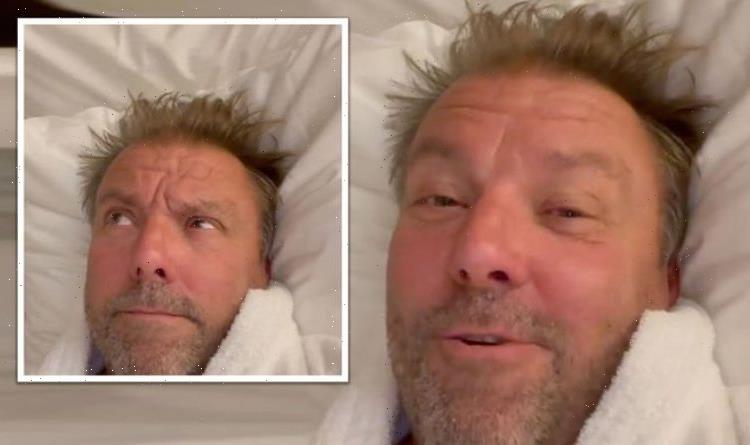 Homes Under the Hammer star Martin Roberts is currently working on a new TV project that he is unable to talk about on social media. However, the TV star has been sharing his feelings about the project online in some cryptic updates, without revealing any further details.

Last night, the 58-year-old presenter teasingly told fans that he was “really worried” ahead of a “huge day” on set.

He asked his 13,300 Instagram followers for some “moral support” to get him through the night in a video upload.

Martin could be seen lying down on a bed in a white fluffy dressing gown as he spoke to fans.

“Tomorrow is a huge day in this new project I’m working on – Sorry to tease, ’cause I’m not allowed to tell you – but I’m really worried,” he said to camera, before laughing nervously.

“And not at all ready… so anyway…hopefully I will survive,” he cryptically continued.

Alongside the footage, he reached out to his followers.

“Still can’t tell you why but I could do with some moral support, which is tricky I know, as you don’t know what I’m doing.

“You got this you are the best,” Instagram user simonburgoyne wrote.

“Whatever it is I’m sure it will all be fine!” added michelle21williams.

“A problem shared is a problem halved Martin,” user helenlodgeproperty said. “Remember I live with a builder if it’s a builder issue. I’m sure it’s nothing you can’t handle tho.”(sic)

“Oh how I wish it was so simple,” Martin replied.

“Dancing on Ice,” user carolobrien1 offered with an ice skate and a thinking emoji.

It was early last month that Martin teased the details of his very “hush hush” TV project.

At the time he told fans that he was “very proud” to be a part of the upcoming project but would have to change some of his eating habits and adopt a more healthier diet.

In the meantime, he was going to enjoy a celebratory meal of pizza and champagne.

“So what you are seeing here is a bit of a last supper if you like because there is something very, very, very interesting coming up,” he said in a video upload.

“And drinking and eating pizza for the next few months is definitely going to be out of the window.

“I gotta get myself fit as a fiddle, but I can’t tell you why,”(sic) he signed off, teasingly.