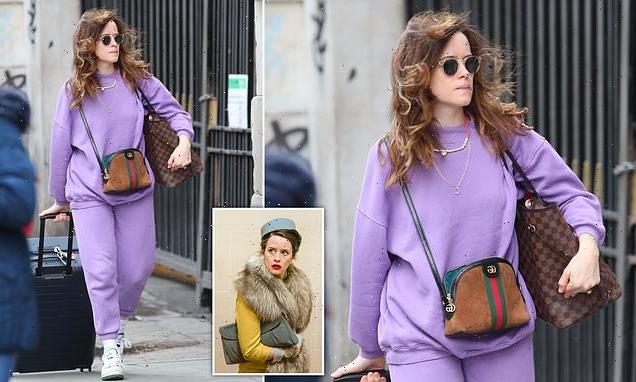 Duchess Claire Foy still has bags of style: A Very British Scandal star dresses for comfort in a lilac tracksuit as she lugs a suitcase and £1,400 shoulder bag to London railway station

On the screen she’s used to gowns and tiaras, but in real life a comfy tracksuit and trainers are just the ticket for Claire Foy as she lugs a bulky suitcase to London’s Victoria railway station.

While her lilac sweatshirt and matching bottoms would make an unremarkable choice for most travellers, fashionistas point out that her designer shoulder bags singled her out as a celebrity.

Even second-hand versions of her Gucci Dome Ophidia suede crossbody bag sell for about £1,000, while her shoulder bag, a Louis Vuitton Neverfull tote in leather and canvas, costs £1,400. 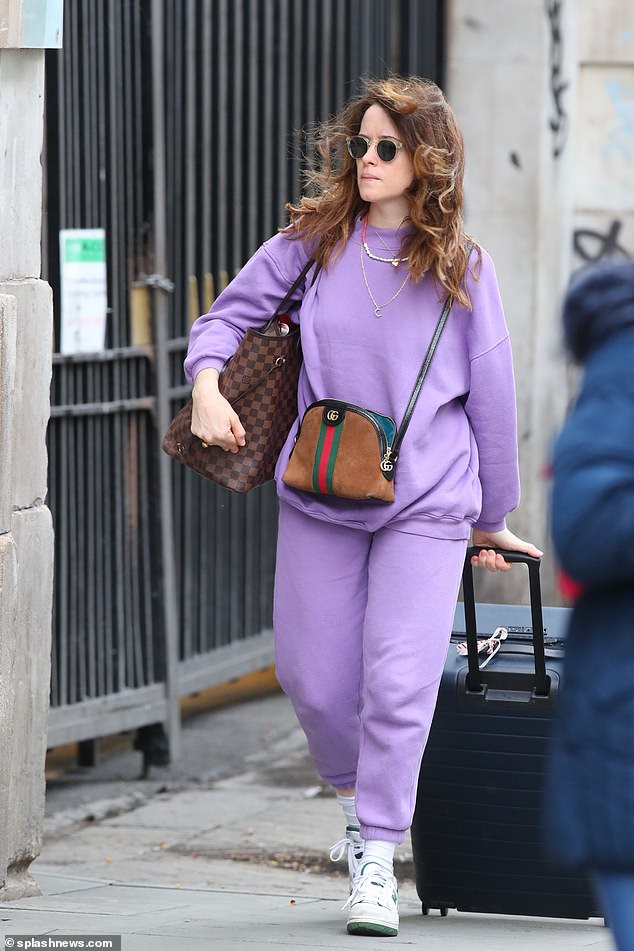 Claire Foy was spotted lugging a suitcase to London’s Victoria railway station, dressed in a lilac sweatshirt, matching bottoms, paired with a Gucci bag across her and a Louis Vuitton tote over the shoulder

The 38-year-old, who played the Duchess of Argyll in the recent racy BBC1 TV drama A Very British Scandal, completed the casual look with New Balance trainers and circular framed sunglasses.

‘She blended in with the crowd and no one took any notice,’ said an onlooker. ‘But her bags cost a serious amount, even if her tracksuit and trainers probably didn’t.’

The actress’s keenness to avoid being recognised was entirely in character, given that she shuns social media and gives only glimpses of her life in rare interviews.

Born in Stockport, she grew up in Manchester and Leeds before moving to Buckinghamshire.

She explored her love of acting at Liverpool John Moores University before spending a year at Oxford School of Drama.

She starred as the Queen in the first two series of The Crown and has a seven-year-old daughter, Ivy, from her relationship with former husband Stephen Campbell Moore, 42.

She is set to star in the upcoming film Women Talking, with Frances McDormand.