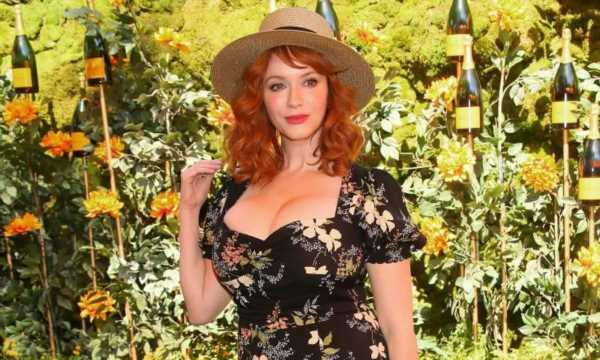 Christina Hendricks painted the town red on Friday when she ventured out into Hollywood for date night with someone very special.

Christina shared photos from her evening in Los Angeles on Instagram and her followers couldn’t believe who she was with.

In the snapshots, Christina was beaming from ear-to-ear as she soaked up the atmosphere at a rooftop party in the city.

On her arm was none-other-than Simon Le Bon, who looked equally as thrilled to be there. But the night out wasn’t romantic, as Christina revealed she’s known him for more than two decades.

“What a magical night that can only happen in Los Angeles,” she wrote: “My old friend of 25 years, Simon le Bon of @duranduran played an intimate rooftop show at @asterhotelgroup in Hollywood last night and it was perfect from start to finish and they sounded AMAZING!!!! #duranduran #simonlebon #asterhotel #hollywood @reformation @milk photos @lifeinmiles @thelondonloves.”

Christina has known Simon for more than two decades

Her fans fell into a tailspin as they didn’t realize they were friends and commented: “Oh! I am just EATING THIS UP! Thank you for sharing,” and another added: “The crossover I didn’t know I needed!!! two faves.”

MORE: January Jones looks fabulous in a bikini with an edge

Others called Christina, “stunning,” and said they adored her glam appearance.

Although the pair make a sweet-looking couple, Simon has been happily married to his wife, Yasmin Le Bon, since 1985.

They have three children together and the model recently opened up about the possibility of renewing their vows with a hilarious and brutally honest comment.

“We thought about that years ago, but now I honestly don’t think I could be bothered to organize a party,” she admitted. “It would just be an ad-hoc kind of thing, and we couldn’t be [expletive]. I think part of the reason that we’re still together is because we had a ramshackle wedding anyway.”