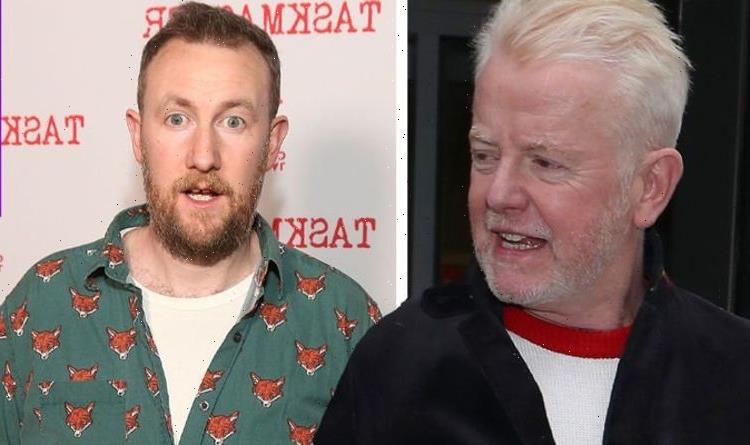 Chris Evans, 55, reprimanded his co-star Rachel Horne’s husband Alex Horne, after he started reeling off “below the belt” talk on his Virgin Radio show. The Taskmaster presenter appeared on Thursday’s programme, where he and the DJ began discussing his marriage to Rachel.

Stop it now, for heavens sake!

“Are you getting married again?” Chris wondered before making a cheeky joke.

“Are you renewing your vows at Pinewood Studios and turning it into a motion picture?”

Alex replied with a quip of his own: “We never got married before Chris, it’s all a sham!”

They then got down to serious talk, as Chris pointed out: “Well you’ve done the opposite, you and Rachel got married and you’re happily married.

“You just never see each other!”

He added cheekily: “And maybe that’s the secret!”

Alex chuckled as he paused for a second: “We sort of, this sounds wrong, feel each other…” he smirked as the radio host looked shocked.

“I was aware of her presence last night but I hadn’t set eyes on her for a while.”

Chris was bewildered at the on-air admission and quickly shut down what he thought he was insinuating.

“That’s quite enough of that!” he exclaimed.

“That’s quite enough of that!

“Literally below the belt talk on this show!”

“Its a family programme!” he shook his head.

“I didn’t expect this from you!”

But despite leaving Chris in obvious shock, the Channel 4 star wasn’t done there.

Instead, he tried to explain what he meant: “We were just next to each other!” he held his hands up.

Knowing full well his explanation was winding the host up, Chris took the bait: “Stop it now, for heavens sake!” he shrieked.

“What’s wrong with you!”

The Chris Evans Breakfast Show airs weekdays at 6:30am on Virgin Radio.