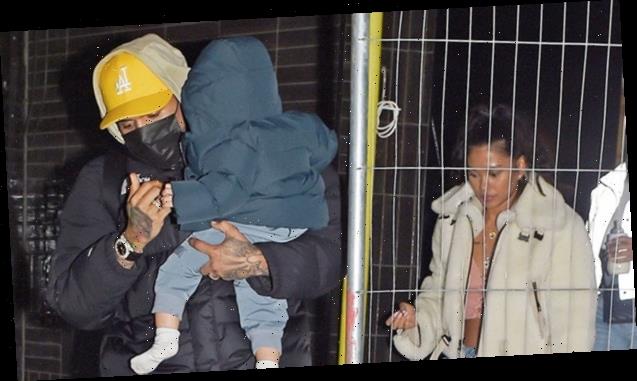 Chris Brown‘s son Aeko Catori Brown just gets more darling by the day. The youngster’s mom Ammika Harris shared an Instagram stories photo while cuddling face to face with the 15-month-old on March 3. Aeko had his little arm around his mom’s neck, as they both looked off camera. As usual, Aeko was rocking top notch designer fashion. The best dressed little boy on the ‘gram had on Gucci’s blue denim bomber jacket that retails for $430.

Aeko’s soft curly brown locks are starting to get longer as seen in the new snapshot. He looked like the sweetest mama’s boy, as Ammika held him in her arms. The model went casual in a simple grey Nike crew sweatshirt. She wore a light layer of makeup, with a soft brown eye, along with light coral cheeks and a rosy lip.

Since Aeko had his mouth closed, his brand new upper front tooth wasn’t visible in the picture. The youngster showed off how his baby teeth are coming in nicely in a series of photos Ammika shared on January 27. Fans gushed over the snapshot and how little Aeko is growing up so fast. Ammika shared other videos over the past several months showing super chatty Aeko learning to speak and trying to get out his first words. He even has a sing-song tone in his voice, which has some fans thinking that he could end up following in his dad Chris’ footsteps one day with a music career.

On the same day she shared a new photo with Aeko, Ammika posted two photos of herself in just the grey sweatshirt to her Instagram account. The mother of one gave sultry expressions in her selfies and noted in the caption, “Can’t believe I’m turning 28 this year.” Breezy himself liked the post, along with 54,000 of Ammika’s followers. While he sometimes leaves flirty comments next to her IG snapshots, the 31-year-old kept his heart emojis to himself this time around.

The last time Ammika shared a photo with Chris and their son was on Nov. 20, 2020, which was Aeko’s first birthday. The snapshot showed Breezy seated with plenty of tropical palm trees behind him, as his son was standing at reaching his arms up to his daddy, appearing to want a hug. “He knows his purpose here on earth. LOVE BOTH OF YOU SO MUCH!” Ammika gushed in the caption about the sweet father and son moment.