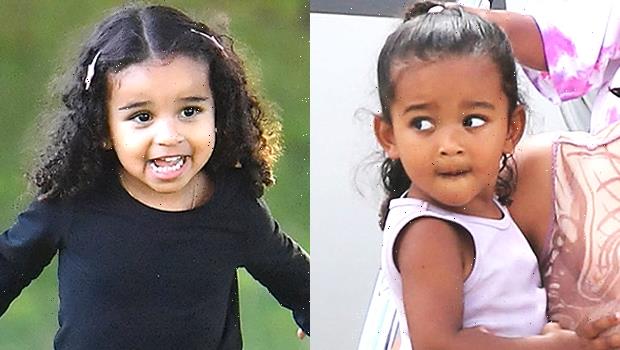 Kylie Jenner, 23, has legions of fans — but none are more loyal than her own family! In the third part of her new YouTube documentary series chronicling the origin story of Kylie Cosmetics, her sweet nieces Chicago West, 3, and Dream Kardashian, 4, made an adorable cameo! The little girls interrupted the billionaire makeup mogul as she sat in a boardroom with grandma Kris Jenner, 65, carrying two silver totes filled with makeup.

They looked so cute and excited as they waltzed in with their gift bags, prompting Kylie to ask, “What did you guys get? Let me see Chi! So cute!” She then FaceTimed her own daughter Stormi, 3, to say hi to her cousins and BFFs. “You guys, your cousins are here,” the former Kylie’s World star could be heard staying, as the cousin duo exclaimed, “Stormi!”

Chicago and Dream were both dressed casually, twinning with ponytails and scrunchies. Dream added a pop of color to her ensemble with bright blue sweatpants, while both little girls rocked crisp white t-shirts.

While Chicago and Dream aren’t exactly at a makeup wearing age, the kids — particularly Chicago — have had some fun with their mom and aunts products in past Instagram videos! Stormi also appeared later on in the video. The toddler, who Ky shares with Travis Scott, 29, showed off her need for speed as she toodled around on a scooter at one of her mother’s photoshoots. “I don’t have any help today with my daughter,” Kylie said to the camera crew. “So, she’s actually here on-set running around somewhere,” she added.

The third part of the docuseries dropped in conjunction with a major shift for Kylie Cosmetics: the mogul recently announced that she is taking the line clean and vegan, dropping all new formulas on July 15. “as some of you may have noticed my @kyliecosmetics website has been shut down for a little makeover,” she wrote. “i started my makeup line when i was just 17 and i felt it was time to elevate and join the VEGAN and CLEAN family,” she said via her original IG announcement.