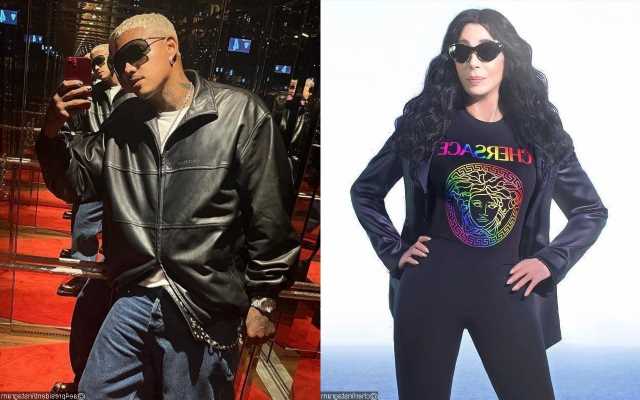 The ‘Believe’ hitmaker posts a photo of the Def Jam head honcho going shirtless while standing at what looks like the edge of a bed while she gushes on Twitter that they kiss ‘like teenagers.’

AceShowbiz –Cher is clearly on cloud number nine while dating A.E. The singer, who has been bragging about her new romance with the music producer on social media, has just posted an intimate photo of her boyfriend on Twitter.

On Wednesday, November 23, the 76-year-old took to the blue bird app to share a snap of A.E. getting shirtless while standing at what looks like the edge of a bed. He flashed a smile to the camera and wore nothing but black boxers, revealing an array of his tattoos.

“A.E.Hanging Ot,” the “Bang Bang (My Baby Shot Me Down)” hitmaker captioned the image. She then followed it up with an equally cryptic tweet in which she declared, “We’re Grown ups.”

Cher also took the time to respond to a fan’s question about their newfound love. When someone asked her, “What is the best quality that you most admire A E ?” she gushingly replied, “He’s Kind ,Smart, Hilarious…& We [lips emoji] Like Teenagers.”

Cher and A.E.’s dating rumors first swirled in early November after they were reportedly spotted hanging out at Chateau Marmont. A few days later, they were photographed walking hand-in-hand during a night out in Los Angeles.

Confirming their relationship, Cher posted a photo of A.E. on Twitter and wrote along with it, “Alexander,” adding one red heart emoji. She also defended the vice president of artists and repertoire for Def Jam Recordings against critics of their relationship.

Someone felt suspicious of A.E.’s intentions. “As we All Know …I WASNT BORN YESTERDAY,& What I Know For Sure…There Are No Guarantees,” she responded to the fan. “Anytime you make a Choice You Take a Chance,” she continued. “I’ve Always Taken Chances…It’s WHO I Am.”

Responding to a criticism about the age gap between them, she wrote in a since-deleted tweet, “Love doesn’t know math, it sees.” She added, “Haven’t You Got Anything Else 2 Do⁉ Let Me Explain…I DONT GIVE A FK WHAT ANYONE THINKS.”

Elsewhere in her Twitter Q&A, the “Believe” songstress said, “I’m Not Defending Us. Haters are Gonna Hate…Doesn’t Matter That we’re Happy & Not Bothering Anyone.”