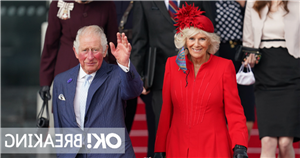 A man has been detained by police after appearing to throw eggs at the King and Queen Consort during a walkabout in York.

Several police officers at Micklegate Bar were seen restraining the suspect on the ground behind temporary fencing set up in the city for the King’s visit on Wednesday.

The King and Queen Consort were being welcomed to York by city leaders when a protester threw three eggs at them, all of which missed before the pair were ushered away.

The man was heard to shout “this country was built on the blood of slaves” as he was being detained by around four police officers.

Other people in the crowd started chanting “God save the King” and “shame on you” at the protester.

Charles and Camilla are visiting Yorkshire to carry out a number of engagements on Wednesday.

They were in York to attend the unveiling of a statue of Queen Elizabeth II, the first to be installed since her death.