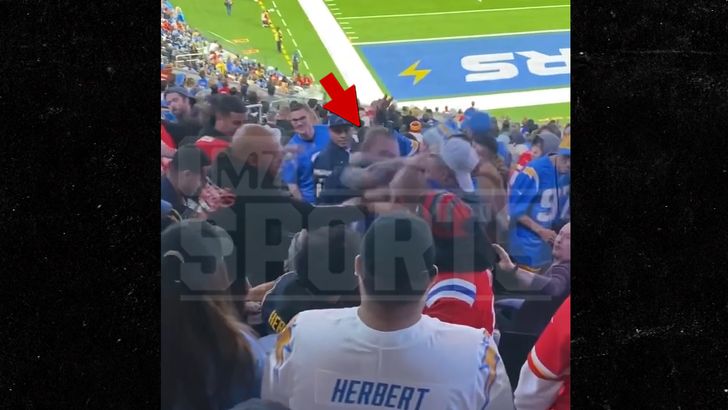 A couple L.A. Chargers fans turned on each other during the Chiefs game on Sunday night … whaling on one another’s faces at SoFi Stadium — as their favorite team played on in the background.

Video, obtained TMZ Sports, shows that a man in a Joey Bosa jersey appeared to have started the melee … when he threw a couple of punches at a guy in a row below him.

Unclear what caused the altercation to break out — but soon after the first blow was thrown, another man got involved … and all hell broke loose.

At least three guys traded haymakers for roughly 30 seconds, before other fans jumped in to slow down the action.

One witness tells us neither police nor stadium security guards ever arrived to check in on the situation … but, fortunately, the parties left on their own without further incident.

Of course, in addition to some bruised knuckles and sore faces … the fans went home with their pride banged up too — because Patrick Mahomes ended up engineering a crazy comeback to beat L.A., 30-27.