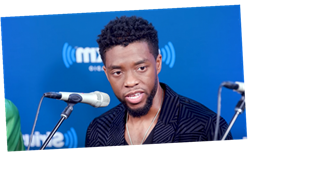 Chadwick Boseman understood how important Black Panther was for so many people who had never seen themselves represented as superheroes.

Following news of the actor’s death, a 2018 interview resurfaced in which Boseman gets emotional talking about a conversation he had with two boys with terminal cancer about how excited they were to see the film. Boseman died after a four-year battle with colon cancer.

“There are two little kids, Ian and Taylor, who recently passed from cancer. Throughout filming, I was communicating with them knowing that they were both terminal,” Boseman recalled in an interview with SiriusXM. “What they said to me, and what their parents said, [was] they’re trying to hold on til this movie comes.”

“To a certain degree, you hear them say that and you’re like, ‘Wow, I gotta get up and go to the gym, I gotta get up and go to work. I gotta learn these lines, I gotta work on this accent,’” he continued. “You’re like, ‘This can’t mean that much to them,’ but seeing how the world has taken this on, seeing how the movement and how it’s taken on a life of its own, I realized that they anticipated something great.”

Recalling how as a kid he also waited for Christmas or his birthday to come to get a certain toy or an experience, he noted that he did “live life waiting for those moments.” He then started to tear up and paused trying to collect himself.

“It means a lot,” he emotionally said, as Lupita Nyong’o and Danai Gurira reach out to him.

News of Boseman’s death came to a shock to many, as the actor never publicly spoke about his battle with cancer.

“It is with immeasurable grief that we confirm the passing of Chadwick Boseman,” read the statement posted on his social media pages on Friday.⁣ “Chadwick was diagnosed with stage III colon cancer in 2016, and battled with it these last four years as it progressed to stage IV. “

“A true fighter, Chadwick persevered through it all, and brought you many of the films you have come to love so much. From Marshall to Da 5 Bloods, August Wilson’s Ma Rainey’s Black Bottom and several more, all were filmed during and between countless surgeries and chemotherapy,” the statement continued.

For more on Boseman, see below.