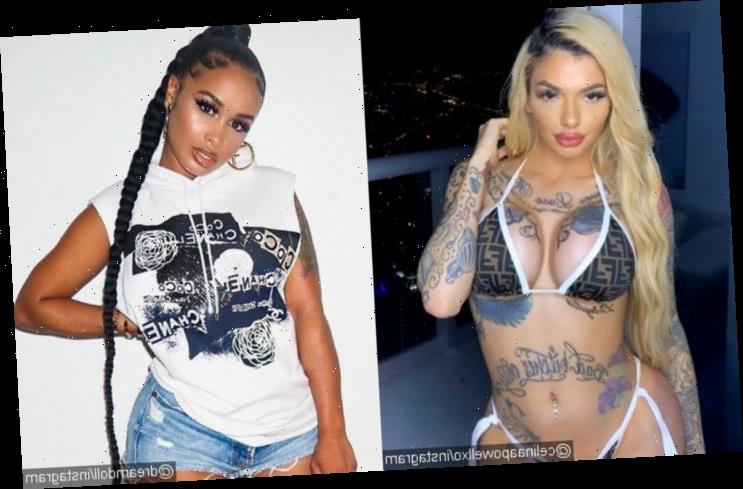 In response to the self-proclaimed thot saying she slept with the blogger to get on his platform, the femcee calls the social media star, ‘dusty washed up lying a** h**.’

AceShowbiz –Celina Powell and DreamDoll‘s beef is pretty much on. It all started after the self-proclaimed thot revealed during her recent podcast appearance with Danielle Victor that the hip-hop musician slept with DJ Akademiks before, and it’s safe to say that Dream was not having it at all.

Speaking to the host, Celina said, “DreamDoll f**ked Akademiks to get on his platform. I saw the DMs like hmmm.” Not stopping there, the social media star, who has multiple histories of sleeping with a number of celebs, alleged that she had video evidence of Tory Lanez and Dream sleeping together and sent the footage to YBN Almighty Jay, who used to be dating the “Pull Up” rapper at one point.

Dream was quick to deny the allegations and go off on Celina through a series of Twitter posts. “So let’s address today’s rumors cause I have time now,” she began, before calling Celina “dusty washed up lying a** h**” and denying the allegations. “I NEVER AND WILL NEVER F**K NOBODY TO POST ME ON DAMN BLOG I BEEN POPPING SINCE I WAS 19 I COULD SWITCH UP MY HAIR AND IT WILL GO VIRAL SO SMD BROKE H**,” she wrote in all caps. “Dreamdoll never f**ked no damn akademiks.”

Referring to Celina claiming she had Dream and Tory’s sex tape, Dream added, “Oh yeah and that video you say you got post it!!! Pretty pleaseeee.” She then elaborated, “No f**k that s**t y’all talking bout don’t bring attention she want attention imma give it to her nobody finna play with my name on god.”

It didn’t take a long time for Celina to respond to Dream. However, instead of hitting back at the rapper, she decided to troll her by posting Dream’s alleged arrest record. It was stated that the “Everything Nice” spitter was charged with prostitution. “Ahh Ahh Ahhh,” so Celina wrote in the caption of the post.

Dream has yet to respond back.