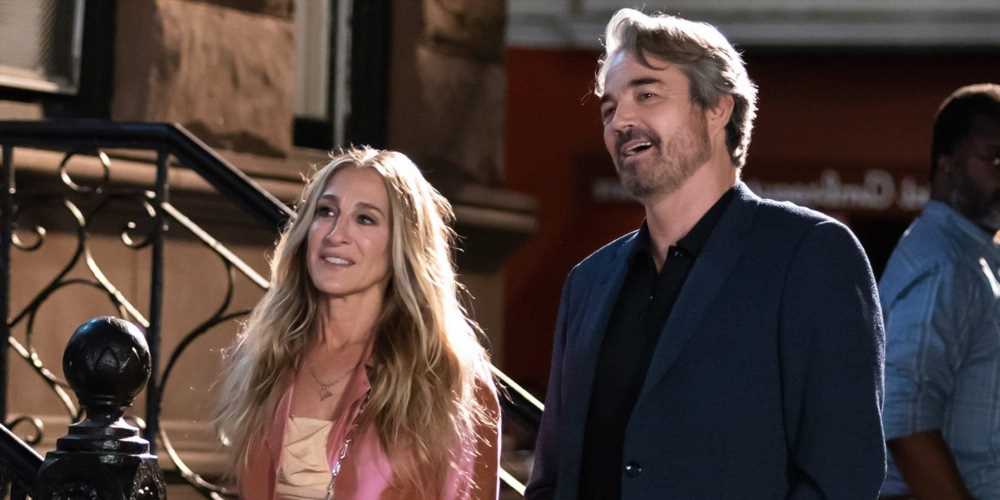 Add another confusing layer to the And Just Like That … plot line. Beloved columnist Carrie Bradshaw was seen kissing another man — that wasn't her husband and long-time love interest on the show, Big. On Wednesday, Sarah Jessica Parker was spotted filming scenes for the highly-anticipated and much talked about Sex And the City reboot in the West Village of New York City. Along with her? A new mystery man (where's Mr. Big?) who after strolling along the side walk with her plants a passionate kiss on the show's leading lady. Have her and Big officially called it quits?

RELATED: Everything We Know About the Sex and the City Reboot The two characters appear to be returning from an evening out of some sort, as SJP wears a floor length, floral dress paired with a hot pink satin blazer, a sparkly crossbody bag, and pink platform heels.

RELATED: Fans Think Carrie Is Scattering Ashes in the And Just Like That … Set Photos from Paris

The actor behind the unnamed character is Jon Tenney, and it's actually not his first time working with SJP. The two were costars in the 1990 drama Equal Justice, playing Jo Ann Harris and Peter Bauer.

Surely after this kiss, fans will have theories and speculations about what happened between Big and Carrie. Some already seem to think that Carrie was spreading Big's ashes in set photos from Paris. One fan commented on an Instagram post with the Paris photos writing, "I think she's scattering his ashes and he's there as a dream."

Further convincing evidence of Big's death? Even as Carrie smooches this new man, she continues to wear her wedding ring from Big. We have so many questions, but we'll just have to wait and see.