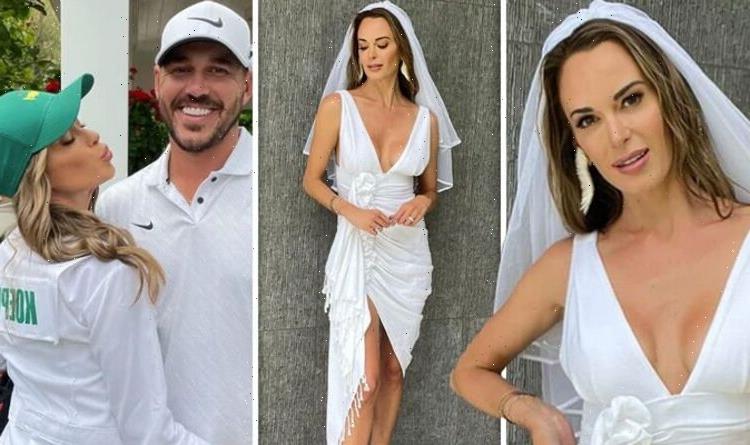 While posing in a figure-hugging, revealing dress, Jena Sims, 33, had fans believing she had “eloped” with pro golfer Brooks Koepka only to admit later in the same Instagram post that it was merely an April Fool’s prank. Jena posted in view of her 247,000 Instagram followers.

Some fans believed her when she captioned her Instagram post, saying she had run off to get married with her fiancé.

The American actress stunned while modelling the wedding gown, which had a plunging neckline and revealed her cleavage.

Before she cheekily added: “April Fools!

She then went on to give some information about the brand whose clothing she was wearing in her social media post.

Jena said: “What’s no joke: @intermixonline launched their bridal capsule collection and they have you covered for all wedding related events- from best dressed guest to bride – to bachelorette.”

She posed in a series of photos in which she looked incredible in bridalwear from sexy numbers, to more casual dresses.

She then admitted she had been fooled by Jena, saying: “And yes you got me.”

The clothing brand Jena had collaborated with for the post also commented with flattering messages.

They said: “So gorgeous- We love all of these dresses on you!”

Jena recently proved that she can look incredible in anything she chooses to wear, including a caddy outfit, which can be hard to pull off.

She wore the white jumpsuit while supporting her partner – professional golfer Brooks.

At the Par Three Contest ahead of the Masters, Jena carried Brooks’ equipment and wore a green baseball cap.

The 33-year-old is often seen supporting the PGA star on the golf course.

Jena has appeared in TV shows such as Entourage, Dexter and One Tree Hill.

The model playfully describes herself as a ‘Krispy Kreme Connoisseur’ on Instagram.

Elsewhere, Brooks spoke out about his thoughts on Tiger Woods competing at the Masters.

Brooks said it will be “difficult” for Tiger.

This comes after Tiger was involved in a serious car incident in February 2021, which left him with horror injuries.