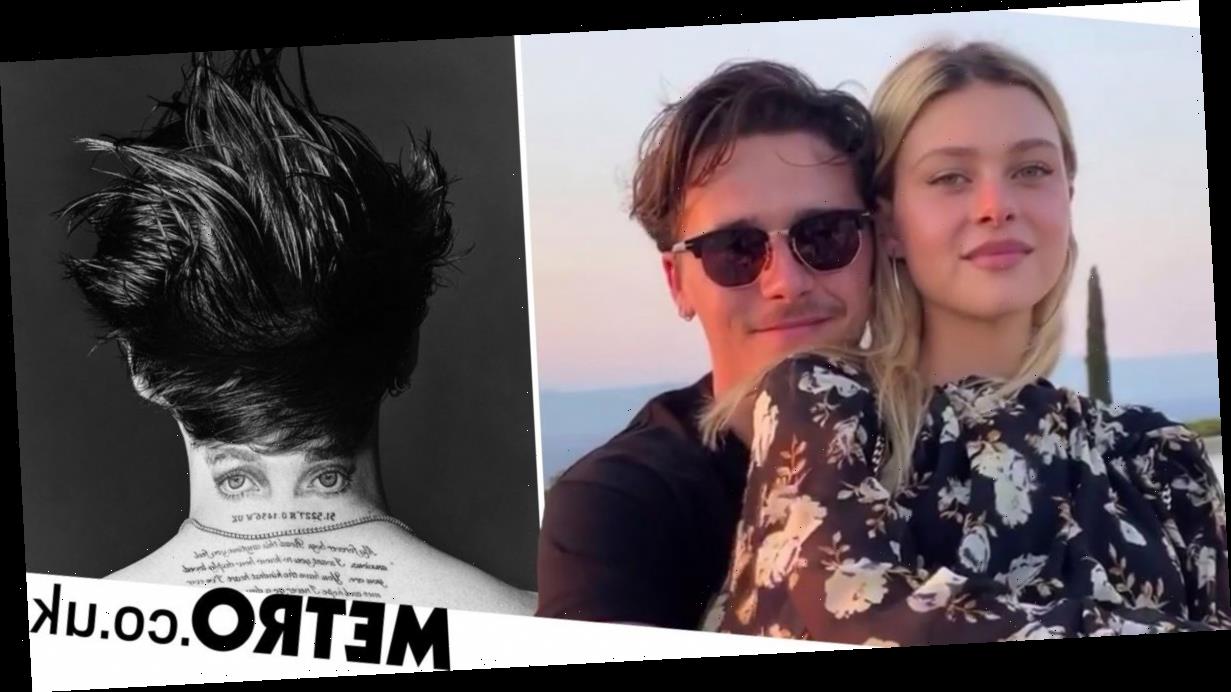 Brooklyn Beckham is out here adding to his tattoo collection inspired by fiancé Nicola Peltz, with his latest inking being a love letter she gave him.

The 21-year-old took to Instagram on Saturday to reveal his new tattoo, that he’s had etched onto the back of his neck, underneath a tattoo of Nicola’s eyes.

The sweet note sees Nicola profess her love for her husband-to-be, with the model, 25, signing off her letter as Brooklyn’s ‘future wifey’.

It reads: ‘My forever boy, read this anytime you feel anxious. I want you to know how deeply loved you are.

‘You have the kindest heart I’ve ever met and hope I never go a day without your love. I think you are so incredible.’

Nicola tells Brooklyn: ‘Just know we can get through it all together if you breathe slow and trust. I love you beyond. Love always, your future wifey.’

Brooklyn shared a black and white photo of him posing shirtless with his back to the camera to show off his latest inking.

It sits under coordinates and Nicola’s eyes that he has tattooed onto his neck and Brooklyn captioned his post: ‘Love letters ❤️.’

Brooklyn already has an impressive collection of tattoos, including ‘mama’s boy’ etched on his chest, a huge angel above his stomach and a camera on his bicep.

He also recently had the name ‘Gina’ tattooed onto his arm in honour of Nicola’s late grandmother, with Nicola revealing on Instagram the tribute was the ‘best birthday gift’.

David and Victoria’s eldest son Brooklyn got engaged to Nicola in July, after just eight months of dating. He announced their exciting news on social media, two weeks after he proposed, and gushed he was ‘the luckiest man in the world’.

Both David and Victoria were seen giving their seal of approval and it’s since been reported that the pair are set to wed in 2022, after postponing plans for their big day due to the coronavirus pandemic.

It was claimed Brooklyn and Nicola originally planned to marry in September 2021, but the couple decided it was ‘too risky’ to go ahead this year, given restrictions currently in place that limit guest numbers.

Sources claimed: ‘They don’t want the pressure of having to plan and postpone again and don’t want limits on guest numbers.’