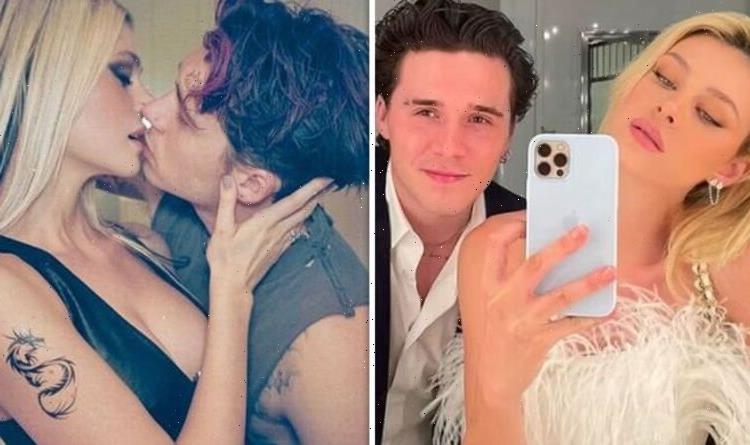 Brooklyn Beckham and Nicola Peltz have spent their first night together as a married couple after what was no doubt a fun-filled wedding reception. The pair said “I do” in front of A-list guests, before kissing for six seconds and dancing to Elvis.

According to reports, the loved up duo enjoyed a lingering first smooch as husband and wife, before heading out to the dancefloor to Can’t Help Falling in Love by Elvis Presley.

David and Victoria Beckham’s eldest child is reportedly set to add his wife’s surname as his middle name in a show of his “commitment” to her.

A source revealed the photographer will now go by the name Brooklyn Joseph Peltz Beckham.

“Brooklyn is head over heels for Nicola – it’s a huge sign of his commitment to her, and his love for her,” an insider told The Sun.

But the sweet gesture would not be Brooklyn’s first tribute to his beloved partner.

He has a number of tattoos dedicated to her in different parts of his body – including a drawing of her eyes on the back of his neck.

Brooklyn also got Nicola’s name tattooed on the side of his neck.

Plus, he got a love letter from his now-wife tattooed across the top of his back.

The star-studded event was hosted at Nicola’s billionaire father’s £76million mega-mansion in Miami.

With Nicola’s father Nelson Peltz worth an estimated £1.3billion, and Brooklyn’s parents worth a combined £345million, it’s no wonder the event was packed with glamour.

But businessman Nelson will be reportedly footing the entire bill for his darling daughter, who wore a Valentino dress.

At £3million total cost, the big day was four times what Posh and Becks splashed for theirs back in 1999.

A reported £50,000 of rare orchids adorned the venue, while guests quenched their thirst with an “unlimited” supply of £200 bottles of Bollinger champagne.

To soak up the booze, Brooklyn’s pals will be treated to top notch Cordon Bleu grub catered by none other than celebrity chef and family friend Gordan Ramsay, who stayed to watch the nuptials.

The wedding marquee featured a white and gold theme, and the venue also boasts an outdoor tennis and basketball court and a swimming pool.

There is an enormous music system to help attendees dance the night away as guest Snoop Dogg performs a DJ set.

The Beckhams’ youngest child, Harper, attended the ceremony as a flower girl.

She also took part in the ceremony as a bridesmaid and was pictured wearing a white dress and a flower crown on her head.

Nicola had six maids of honour, while the groom was accompanied by six groomsmen.

Meanwhile Brooklyn’s younger brothers, 19-year-old Romeo and 17-year old Cruz were kitted out in identical tuxedos as his best men.