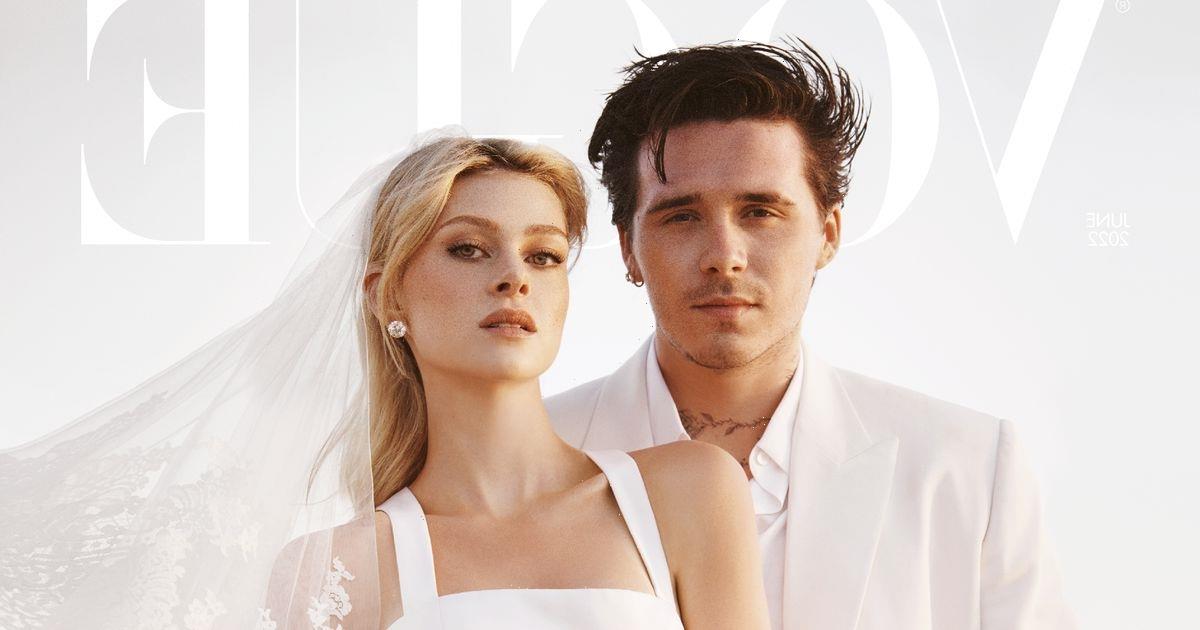 Newlyweds Brooklyn Beckham and Nicola Peltz have shared an intimate glimpse into their lavish £3 million wedding as they take centre stage on the June 2022 Vogue cover.

The young couple have appeared on the front cover of the iconic magazine to celebrate their wedding, and in the accompanying interview, the duo tell all on their star-studded April ceremony.

From designer outfits to gourmet food, no expense was spared by the happy couple as they swore off social media to keep their soiree intimate and private for the happy occasion – which reportedly set the family's back a whopping £3million.

So what exactly was the wedding like? Here's a closer look at the intimate wedding’s finer details… While getting married at home may not seem like the obvious choice for most couples, that was precisely what Brooklyn and Nicola opted for as the pair tied the knot at the home of Nicola’s parents on Saturday 9 April.

Known as Montsorrel, the 27 bedroomed property is located in Palm Beach, Florida and belongs to billionaire investor Nelson Peltz and former model Claudia Heffner Peltz, with the estate offering ample room to cater for the couple’s 600 strong guest list.

The classic epitome of Palm Beach style, the mansion boasts a lush white exterior and bright blue shutters, while its 13 acres of land even include a private beach.

The property also comes with a rich history aside from its real estate prominence, with The Palm Beach Post reporting that the dwelling was built in 1964 by a woman named Anita Young, the sister of artist Georgia O’Keeffe.

Anita had lived in a different home with her husband, a railroad magnate, on the same site, but after he tragically took his own life, she elected to have it knocked down and rebuilt into the luxury property now known as Montsorrel.

The property remained in her possession until her death in 1985, after which is was snapped up by Nicola’s parents for a cool $18 million.

Today, the venue is estimated to be worth around $103 million.

With parents as fashionable as David and Victoria Beckham, there was never any doubt that the Beckham-Peltz wedding would be anything short of stunning and neither bride nor groom disappointed as they said ‘I do’ in stunning haute couture.

It was Nicola’s dress that first stole the show as she walked down the aisle in a sleek fitted Valentino Haute Couture gown that accentuated her slim figure, with a luxurious train cascading behind her.

The gown was the result of over a year’s worth of planning with Valentine’s creative director Pierpaolo Piccioli, with Vogue even revealing that it had taken two trips to Rome and two US fittings for the dress to be perfectly tailored to the bride’s body.

Described by Nicola’s own stylist Leslie Fremar, as the “most beautiful dress she has ever seen” the simple gown manifested itself as a work of art, free from embellishments aside from a small scattering of timeless French lace.

A special surprise addition unknown to many however, was the bride’s ‘something blue’ for the day, which was an embroidered message from her mother sewing into the skirt length alongside an evil eye.

Brooklyn too was dressed to impress for the most important day of his life, with new wife Nicole even sewing a small bespoke label into his custom Dior Wedding suit as a heartfelt gift in homage to his love of levels.

Opting for a white tailed tuxedo, the young Brit looked every bit the gentleman as he married his blushing bride.

Guests at the luxury soiree were treated to a delicious selection of food provided by Miami chef Thierry Isambert, the culinary genius who used to whip up meals for famous names, including former U.S. president Bill Clinton.

For the couple’s special day, Thierry prepared a special menu which included the usual vegan and vegetarian options, but more uniquely the celebrity chef also prepared a special “light option” for those who were conscious of their calorie intake.

This may have been a nod to Brooklyn’s mother Victoria Beckham, who has been famously particular about what she eats for several years now.

The former Spice Girl turned fashion designer, is known for her ultra-disciplined approach to eating, with the star having completely eliminated oil, butter, sauces, red meat and dairy from her daily diet.

The bride herself too has a particular set of dietary needs, with Brooklyn even admitting earlier this year that Nicola avoided dairy products as he made her a lactose free pizza and dairy free chocolate lava cake for Valentine’s day back in February.

Halibut, filet mignon and a vegan osso buco were all served as part of the main meal, but hungry guests were also treated to a more laid back cuisine once the after party kicked off, as a Wendy’s food truck pulled up to serve cheeseburgers, fries and chicken nuggets.

A number of speeches were given following the ceremony, including from Brooklyn’s brothers Romeo and Cruz, who had both served as his best men.

In true sibling fashion, the brothers spent much of the time joking about who was the better sibling, before moving on to roast newlywed Brooklyn for his loved up social media posts about his bride.

Nicola’s own brother, Brad Peltz, who served as her man of honour, also gave a memorable speech in which he offered the couple two bits of invaluable advice. “Rule number one: Happy wife, happy life. Rule number two: Don’t f**k up rule number one.”

Levity side, the speeches were also poignant and heartfelt, with a father of the bride speech given by Nelson Peltz touching on how precious it was to be able to enjoy such a momentous occasion in light of so much suffering happening elsewhere in the world.

He then went on to praise the couple for their commitment to non-profit work and commended their choice to ask for donations to help the people of Ukraine in lieu of traditional wedding gifts.

By contrast, David Beckham’s speech was a mixture of all those that had come before, equal parts poignant and witty, while laced with a handful of one liners that could make even the most discerning of guests giggle.

After bringing up a particular memory of Brooklyn dressed in a cowboy hat, the footballer apologised for such an embarrassing feat before going on to give his son his own sage advice for a happy marriage: “He said, ‘The most important thing is to make each other happy. And treat your Mrs like gold.’”

Read Vogue's article on Brooklyn and Nicola's wedding here. See the full feature in the June issue of British Vogue available via digital download and on newsstands from Tuesday 24 May.

For all the latest showbiz stories,sign up for OK! 's daily newsletter here.