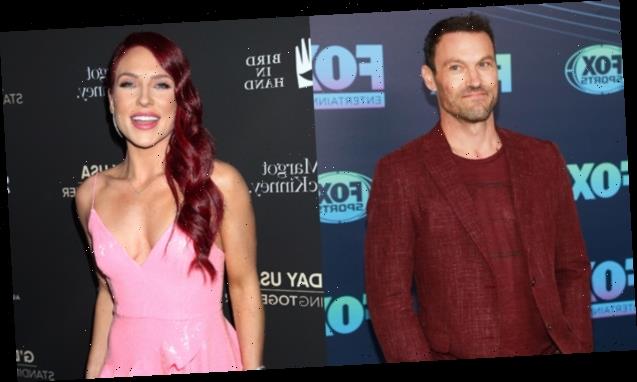 Brian Austin Green and Sharna Burgess took their relationship to the next level by going Instagram official! Check out the two lovebirds sharing a loving smooch in their first official post together!

Brian Austin Green and Sharna Burgess are Instagram official! The couple took to Sharna’s Instagram account on January 11 and posted the sweetest photo, which let fans know that they were no longer hiding their romance. In the snap, the couple posed on a balcony overlooking the beautiful, tropical location of Hawaii. Brian lovingly put his hand on Sharna’s cheek has he passionately kissed her.

“Him,” Sharna captioned the photo in all capital letters, adding an emoji of a lipstick stain. Fans and friends of the couple sent them so much love in the comment section after seeing the pic. “Omg omg omg. I have no words,” Jenna Johnson, a pal of the Dancing With The Stars pro, 35, commented on the pic. “The best,” Gleb Savchenko also commented on the image.

Fans were so happy to see Sharna and the Beverly Hills, 90210 star, 47, finally share their relationship with the world. The photo comes just after Brian gushed about Sharna and their recent getaway. “She’s amazing, super responsible and super sweet,” Brian told Access Hollywood on January 9. “She’s caring, passionate and fun to be around, I feel blessed right now.”

As for how their romance blossomed over their trip, Brian said that he and Sharna “had a great time. Hawaii is an amazing place. It’s all going really well right now, it’s early on so we don’t have any labels for anything obviously, but we’re really enjoying each other’s company.” Despite their fame, Brian and Sharna actually met through fairly average circumstances — work!

“We have the same business manager and she was like, ‘Hey I’ve got a client you should meet’,” he said. “I begrudgingly went, and we met and we had great conversation, so it’s been great.” Brian’s new romance comes after his former wife, Megan Fox, filed for divorce in November after the couple went their separate ways in May. Megan has since been in a committed relationship with music artist Machine Gun Kelly. The former couple share three sons — Noah Shannon Green, 8, Bodhi Ransom Green, 6, and Journey River Green, 4.