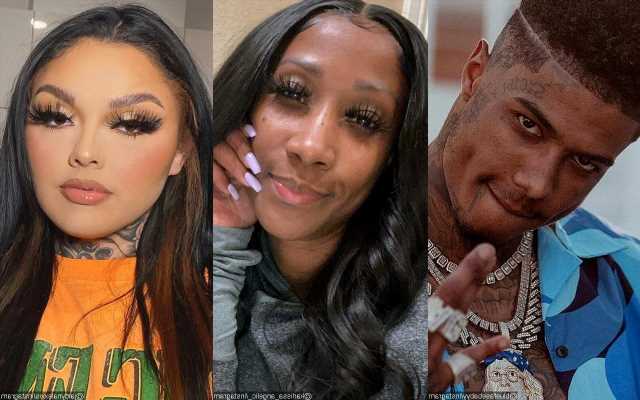 AceShowbiz -The drama between Blueface and his mom has yet to be over. The “Respect My Cryppin’ ” rapper poked fun at Karlissa Saffold after she suggested in a recent social media post that he and his baby mama Jaidyn Alexxis.

Blueface set the record straight after Karlissa shared a photo of a baby, whose face was covered with an emoji, on her Instagram Story. “My princess is here @leo gang,” she wrote in the caption of the post.

Fans have since speculated whether it’s Blueface’s baby. Catching wind of the chatter, the emcee clarified, “The baby still in her belly idk who dat baby is y’all posting,” adding a crying laughing emoji. His baby mama, meanwhile, penned in her own post, “My baby has NOT been born yet. Nice try tho y’all LMFAO.”

Jaidyn, who already shares toddler son Javaughn J Porter with Blueface, confirmed her pregnancy back in December 2021. At that time, she posted a video that saw her giving a gift box to her beau in front of a Christmas tree. Their son, who was also present at that time, excitedly told the emcee, “Open it, open it!”

After Blueface opened the box, it took a while for him to realize that it was a positive pregnancy test. “Are you pregnant?” he asked Jaidyn. After his baby mama said yes, he was quick to hug her, saying, “I knew it and I was right.” Alongside the clip, Jaidyn wrote, “I guess Christmas came a little early this year.”

It remains unclear where things stand between Blueface and Jaidyn. The hip-hop star has been spending time with Chrisean Rock in the past few months. Earlier this month, the “Bleed It” rhymer shared a video of himself taking care of Chrisean who vomited in his 2022 Maybach.

In May, the pair made headlines after getting caught in an altercation with Karlissa and his sister, Kali Miller. The female rapper herself has admitted to assaulting the two. Sharing her side of the story, Chrisean said she punched the rapper’s mother after Karlissa threw a glass jar at her.

Chrisean said she was at Blueface’s house to help him host an event when his mom Karlissa, who has been staying there with her husband, allegedly provoked her. “She swung on me before, but I let it slide,” the artist, who accused Karlissa of bullying her for two years, said during an Instagram Live.