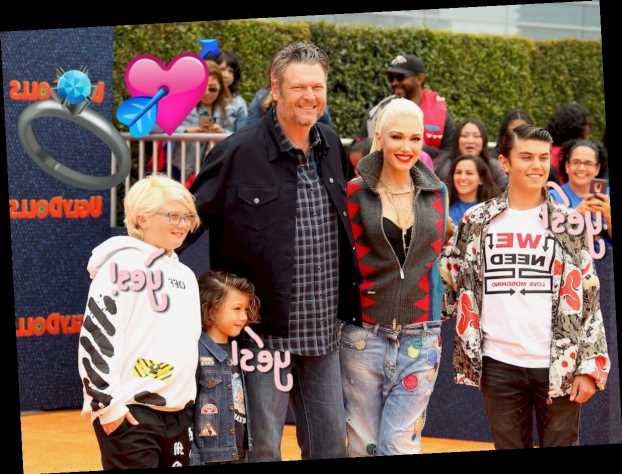 Before Blake Shelton popped the question to Gwen Stefani, the country crooner followed tradition… and then some!

We’ve already heard how he asked her father before getting down on one knee, but there were three other leading men in her life that had to give the green light first: her sons. Prior to asking the 51-year-old for her hand in marriage, Shelton also got approval from 14-year-old Kingston, 12-year-old Zuma, and 6-year-old Apollo.

And we can only guess he got a resounding “yes” from all around!!

Related: Gwen & Blake Get Lovey Dovey For Their Grammys Performance!

A source close to the momma of three revealed to People:

“Blake told her boys that he wanted to propose and asked their permission. Her family very much approves of him. He’s an amazing partner and a great extra dad to the boys. Gwen is ecstatic. The proposal was a surprise.”

As we mentioned up top, the God’s Country singer put plenty of time and thought into the proposal, which included the blessing of his future father-in-law. An Us Weekly insider dished at the time:

“Blake had the ring custom-designed, and asked permission from her dad before asking Gwen. It meant so much to Gwen that Blake was so traditional about it.”

The couple first began dating about five years ago, and the lengthy period leading up to the engagment kept some suspicious if they’d ever make it down the aisle. We’ll guess that they’re not jumping into planning a huge bash at this point because of ongoing coronavirus restrictions and concerns, but it was definitely a relief that split rumors in quarantine were simply hearsay.

It’s clear Blake really values the support of those in Gwen’s life, most especially her boys, which the songstress shares with ex-husband Gavin Rossdale! While chatting with Hoda Kotb and Carson Daly on the Today show back in July, an IG caption from Stefani wishing Shelton a happy father’s day was brought up. The CMT Award winner responded about his new role in their family:

“That’s a scary moment for me because for one thing, for me to be with the kids all the time and be their buddy, but then you do have to consider after a while they start to listen to things that you say and there’s a lot of responsibility that comes with that, which is new to me as Carson can tell you, Hoda.”

Sounds like the whole brood is just as thrilled as the rest of us by the happy engagement news!