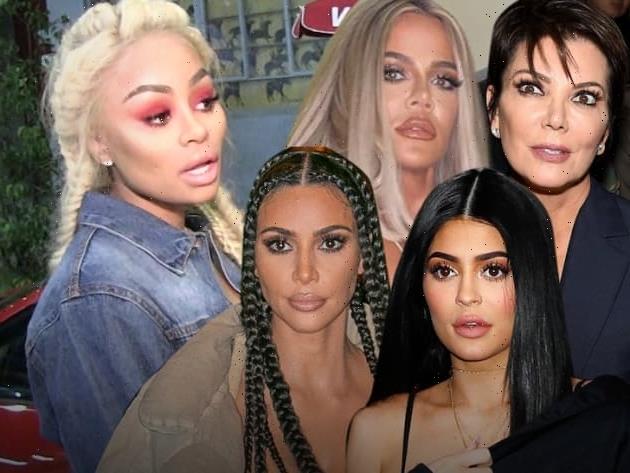 It is officially on between Blac Chyna and every member of the Kardashian family.

On April 18, Kim Kardashian, Khloe Kardashian, Kylie Jenner, and Kris Jenner all appeared in court to witness their legal team and Chyna’s representatives begin jury selection in Blac Chyna’s $100 million lawsuit against her former loved ones.

Yes, Blac Chyna has sued the Kardashians for $100 million.

WHAT IS GOING ON HERE?

Blac Chyna, who was previously engaged to Rob Kardashian and who shares a five-year old daughter with the occasional entrepreneur, filed these legal papers in 2017.

She alleged at the time that Rob defamed her via a number of negative social media posts, while also accusing his siblings and mother of conspiring to cancel the former couple’s E! reality show, “Rob & Chyna,” which aired for one season in 2016.

Chyna and Rob called off their engagement in February 2017, just a few weeks after this cancelation.

A few months later, Chyna sued Rob and his family, claiming she suffered “significant damages” as a result of Rob leaking nude photos of her during an explosive Instagram rampage.

HOW DID THE PROCEEDINGS OPEN?

Kris, Kim, Khloé and Kylie have all been named defendants in the case.

They were seated together on Monday when the trial began at the Los Angeles Superior Courthouse, although Rob was not present for the first day of jury selection.

During jury selection, the 70-plus potential jurors were questioned about their awareness of the famous defendants and plaintiff.

One individual reportedly told a judge “I’ve seen the Kardashian sex tape,” disqualifying himself in the process.

DID ANYONE ELSE GET TURNED AWAY?

When asked about the Kardashians, another man responded:

“Anything that has to do with their names is just a big no for me.”

According to USA Today, a female was also asked about this group, saying in court:

“I am a pretty big fan of the Kardashians, so I don’t think I would be able to make an unbiased judgment.”

WHO IS EXPECTED TO TESTIFY?

In court documents obtained by People Magazine, Ryan Seacrest — who served as one of the show’s executive producers — appears on Blac Chyna’s list of witnesses.

The Live with Kelly and Ryan co-host “is expected to provide live testimony and will be called during Plaintiff’s case-in-chief,” the record states.

Kris and her boyfriend, Corey Gamble, as well as her daughters — Kim, Khloe and Kylie — are also featured on the joint witness list.

HOW MUCH COULD CHYNA WALK AWAY WITH HERE?

Chyna is seeking more than $40 million for loss of earning damages and more than $60 million in loss of future earning capacity damages, based on court filings.

VENGEANCE WILL BE HERS?

Ahead of the trial, Blac Chyna’s lawyer said in a statement that her client is “thankful” to be able to prove to a jury that all four defendants “abused their power” to cancel her program.

“Chyna went from being the star on E!’s number-one hit show at $92,500 per episode to being off the airwaves entirely,” the attorney said.

“The defendants’ illegal conduct not only cost Chyna millions and millions of dollars, their conduct was emotionally devastating to her. Kris Jenner was like a second mother to Chyna and Kim had been her BFF for years.

“The extreme betrayal and humiliation felt by Chyna after discovering the truth about what the defendants did to her lingers to this day.”