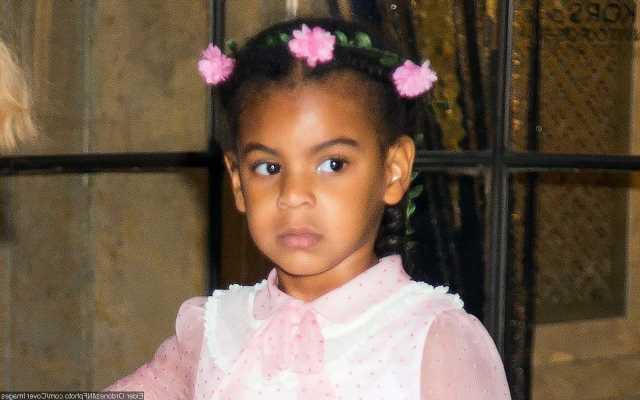 The 10-year-old girl joins her famous parents at the charity event when she makes over $80,000 bid on a pair of Lorraine Schwartz diamond earrings worn by her grandma Tina Knowles.

AceShowbiz -No stranger to stealing the spotlight, Beyonce Knowles‘ daughter Blue Ivy Carter has shocked the crowd at the Wearable Art Gala. The 10-year-old girl low-key flexed at the charity event in Los Angeles on Saturday night, October 22 as she made a stunning bid of over $80,000 on a pair of earrings.

In a video taken and shared by a fellow attendee at the gala, Beyonce’s mom Tina Knowles and Keke Palmer served as the auctioners when the bid almost stopped at $80,000 on a pair of Lorraine Schwartz diamond earrings worn by Tina. When the actress counted twice, Blue, with the supervision of her famous parents Beyonce and Jay-Z, jumped up from her chair and entered the bidding war by waving her paddle.

Tina seemed to be moved by Blue Ivy’s action while Keke was literally almost floored. Cheer erupted from the audience as someone behind the camera was heard exclaiming, “No! Wow… Oh, she’s just so rich!”

Blue Ivy eventually lost out to founder of Mielle Organics, Monique Rodriguez, and husband Melvin, whose winning bid was $105,000. The earrings once belonged to the “Single Ladies” hitmaker.

The 2022 Wearable Art Gala picked “Harlem Nights” as the theme to celebrate fashion from the 1920s to the 1950s. Beyonce wore a custom, strapless Gucci mermaid gown that had stars embellished at the bust. She completed the glamorous look with pink opera gloves with ruffles at the shoulder, a pair of Lorraine Schwartz earrings and a Dolce & Gabbana clutch.

Jay-Z was also dressed to the nines in a velvet tuxedo jacket, which he teamed with a white dress shirt, black bowtie, black pants and black patent leather dress shoes.

Also spotted at the event was Angela Bassett, who looked fresh in a green feather dress. Chloe Bailey was ravishing in pink, while her sister Halle Bailey showed skin in a revealing black gown. Halle hit the red carpet with her boo DDG, who also opted for an all-black number.