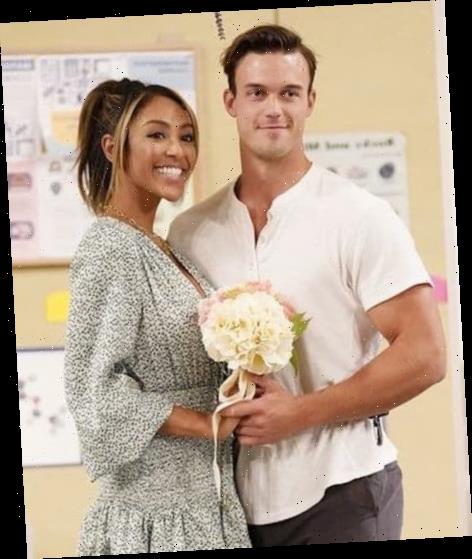 And Matt James has already been cast as The Bachelor for 2021.

But it’s never too early to look forward to 2022, is it? Especially not when it comes to this beloved franchise, right?

Along these intriguing lines, Ben Smith was eliminated from The Bachelorette this past episode, with Tayshia Adams admitting it was difficult to send the military veteran home.

It was difficult to viewers to watch, too.

The 30-year old had grown into a fan favorite ever since he shook Clare Crawley’s hand… and then transitioned over to Tayshia’s season.

Smith was very candid throughout his run on the show, opening up about his health issues, which have included depression and an eating disorder.

“I found out what girls were when I was 15. I realized they don’t like the fat kid. So I stopped eating. I started working out all the time,” Ben told Adams at one point.

This resulted in Ben losing 70 pounds… and him having bulimia for 10 years during his 20s.

Ben also told Adams about his sister being the only person he couldn’t hide the truth from, even though he kept it from everybody else.

“She saved my life,” he confessed.

… Smith couldn’t open up completely to Tayshia. He couldn’t come right out and say he loved her, which is why he was sent home on Tuesday night’s emotional episode.

“She makes me feel a way that I’ve never felt in my entire life and I think the feeling is happiness. Like genuine, legitimate happiness,” Ben said during a confessional, adding:

“And every time I’m around her I’m more impressed with the way that she’s able to make me into some sort of better person. I don’t have the words to describe it.

But when Adams asked Smith about his feelings?

“My brain couldn’t work,” the suitor said in an on-camera interview.

“In true Ben fashion, I just blew it. I’m in love with her and I should’ve told her and now I’m terrified I won’t get a rose this week and I won’t get to tell her how I feel.’

“And that kills me inside.”

Why did Ben hold back from Tayshia?

Rachel Lindsay and Becca Kufrin discussed this topic on the latest edition of their Bachelor Happy Hour podcast.

And they have a theory.

Rachel said she “1000 percent” thinks Ben wants to be The Bachelor.

Becca agreed, even alleging that Smith was manipulating the situation to eventually land this lead role.

She said that Ben knew “how to play it, to give us enough, to open up just enough, but not fully commit to this relationship” with Tayshia.

Why would he do this?

To make himself look like a prime Bachelor candidate; to paint himself as someone who is open (to an extent) and vulnerable, and who has an inspiring life story, and who just really wants to settle down with the right woman.

“He does just enough to stay by,” Lindsay said on Wednesday, adding:

Kraus came in second place during Lindsay’s 2017 season of The Bachelorette.

The two had an emotional farewelll after he didn’t want to propose and she, in turn, accepted a proposal from Bryan Abasolo.

Convinced that Ben is sort of conniving his way toward The Bachelor, Lindsay offered up this piece of advice to producers on her podcast:

“I beg producers, please don’t do it. We’ve been here before with the person who is so desperate to be the lead. It never works out.

“When they want it so badly, when they’ve been planning for it, calculating, made certain moves to get to that point and then you give it to them, it always messes up.

“There are so many great men from the Clare [Crawley]/Tayshia season. Don’t pick him. I don’t want to see it.”

The Bachelorette Spoilers: How Many More Surprises Are There Left?!Start Gallery