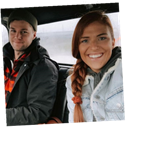 Audrey Roloff has some advice for wives around the world.

Or future wives around the world.

Or just for women in general, we suppose.

If they have any interest in landiing a loyal husband at any point in their lives, that is.

It’s titled “Creative Love: 10 Ways to Build a Fun and Lasting Love” and it purports to offer important words of wisdom to anyone in a relationship.

This couple has been together for a total of 11 years and has often earned criticism for assuming that whatever has worked for them will work for others out there.

Audrey, in particular, has garnered backlash for her pompous, know-it-all attitude.

It’s on full display once again in this latest book, with Audrey even explaining how she and Jeremy saved herself themselves marriage.

In the sexual sense, we mean.

And yet: Audrey delves into detail about how the twosome “lost the purity battle,” expounding as follows:

‘Purity is less about refraining from one act and more about honoring the other person’s mind, heart, and body as you progress toward marriage.

“It’s recognizing that until the day they become your spouse, they do not belong to you, nor you to them.”

“It’s honoring the person who is to be their spouse one day and not creating confusion or stirring up feelings that will cloud judgment as you discern whether you will be each other’s partner for life.”

Audrey went on to say that neither she nor her future husband were perfect in this confusing endeavor.

But when they “messed up,” they would just “start over” again the following day.

Boundaries were key, the mother of two outlines;

“For example, setting an alarm for when we would say goodbye for the night, finding a friend or mentor who would hold us accountable (and telling them when we would be spending time with each other, particularly at night), not lying down together when watching movies, not watching anything with nudity (together or separately)…”

Sounds like rules that Jim Bob Duggar could get behind.

Also sounds a bit extreme — not lying down to watch movies?!?

But, hey, whatever works for you, right?

Audrey then delves into “screen use” and honed in on the idea of watching other people bone.

Writes Audrey in the book:

“Maybe you’re reading this and have been married for years but never asked your spouse if they struggle with pornography or what accountability and boundaries they have in place to prevent their eyes from wandering.”

We should stop here and note that Jeremy confessed last year to having been addicted to pornography.

Roloff said he “had wandering eyes when it came to risqué images and social media profiles I had no business looking at.”

Thankfully, a pastor in Oregon helped break Jeremy of this habiit.

Audrey, therefore, speaks from some experience when she tells readers in the book:

“Unfollow some accounts on social media, put away your devices past a certain time of day, limit time with a particular coworker, or stop watching a particular TV show.”

How else can spouses be assured of their loved one’s purity?

“As the saying goes, you steer where you stare,” concluded Audrey on this topic.

They have plans to get pregnant again soon.

They also do seem legitimately happy and we don’t judge them one iota for putting guidelines in place that have worked for them over the years.

We also can’t blame critics, though, for reading stuff like this, rolling their eyes and wondering:

Why are you putting all of this out into the world?!?