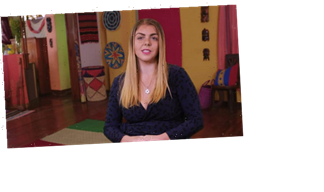 Ariela Weinberg has defended her decisions to 90 Day Fiance fans who questioned her on-screen choices.

But some viewers just want to know what it’s really like — and how much it costs — to have a baby in Ethiopia.

Biniyam was previously married to an American woman whom he met in Ethiopia.

Just as with Ariela, his ex ended up pregnant. Due to pregnancy complications, she had to give birth in the US.

Ariela didn’t want Biniyam to miss the birth of another child, so she resolved to have baby Aviel in Ethiopia.

This was a huge compromise, and after months apart before Ariela’s return, she had mixed feelings about her relationship with Biniyam.

Ariela’s mother is a nurse and her father is a doctor, so her mom — who accompanied her for the return trip early this season — inspected the hospital.

It is not uncommon here in the US for family to tour a hospital where they will give birth, and Janice gave the hospital her seal of approval.

Janice was not taking any chances when it came to her daughter — she had already ruled out two different sub-par rental properties that Biniyam had set up.

(Reminder that this is not Biniyam’s fault; Ethiopia endured centuries of colonial oppression and has yet to recover)

But the hospital was hygienic and safe — which was good, because Ariela’s delivery turned out to be much more complicated than they had imagined.

Ariela and Biniyam went in for a checkup at the hospital. It was supposed to be a routive visit during pregnancy.

Instead, the doctors informed her that she would have to have a C-section that day.

Understandably, Ariela was in tears, frightened and feeling alone as she prepared for major surgery while her family was still an ocean away.

Ariela was okay. Her baby, Aviel Biniyam Shibre, had some minor respiratory issues at birth but was otherwise okay.

But … just how much did her hospital stay, one involving surgery, cost?

In the United States, after all, your average childbirth costs $30,000. (And people wonder why most Millennials don’t have kids!)

However, according to Screenrant‘s research, the cost to have a baby in Ethiopia is a little different.

Having a natural, venereal childbirth in Ethiopia costs an average of … $7.70. That’s the cost of an appetizer in the US.

Cesarean sections cost a little more, at $51.80 in US dollars … keeping with our previous comparison, the price of lunch for two plus a tip.

The difference in cost between the average birth in the US and having a C-section in Ethiopia is about 600 to 1.

Given that both places allow expecting parents to have a healthy baby, some fans may be confused at the price difference.

Here’s a hint: the US has allowed the medical industry to prey upon customers, charging whatever it wants in the name of “freedom of choice” while other countries get to be normal.

We have seen a lot of discussion about financial differences between the US and Ethiopia.

Some things are more expensive in Ethiopia — for example, what we would consider to be very old used cars cost a lot to import.

Additionally, a lot of baby-related supplies are either unavailable or extremely expensive.

Sometimes, we see how 90 Day Fiance stars from developing countries imagine that the US is filled with rich people.

If you look at, say, a $50,000 salary in the US and you’re from a country where a month’s rent is $500 for a good-sized apartment, it looks like even middle class Americans are “rich.”

When you factor in the costs of housing, food, and healthcare alongside decades of wage stagnation, you can put those salaries in their painful context.

That said, there are some things about childbirth in Ethiopia that Americans might find jarring in comparison.

Most have to share a birthing and recovery room. During labor, those about to give birth are told to walk around a lot.

In Ethiopia, 80% of the population lives in rural areas and many families welcome new babies at home. Slowly but surely, access to healthcare is expanding.