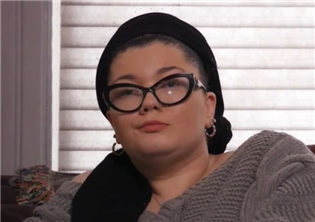 To hear her tell it, Amber Portwood is the most unfairly maligned person on the face of the planet.

She doesn’t blame Leah directly for ignoring her endless messages, but she doesn’t take the hint, either.

Amber thinks Leah was poisoned against her by her real parents, Gary and Kristina Shirley.

On this week’s Teen Mom OG, she laid all of the blame at the feet of Leah’s “bonus mom.”

There are lots of difficult jobs that leave you feeling dirty, physically or mentally or both.

One of those is being a producer who has to lend a sympathetic ear to Amber Portwood as she complains about her life.

This week, in the aftermath of treating herself to a hotel stay after not hanging with Leah on Easter, Amber griped to a producer about how hard things are.

“It’s been a while since I’ve seen her,” Amber said of her 12-year-old daughter.

Notably (and to the world’s everlasting relief) Amber does not have custody of Leah.

“She hasn’t even answered any of my text messages,” Amber complained to her producer.

“She’s not going to answer my phone calls,” Amber admitted.

“But she has a Bonus Mom, so …” she continued scathingly, in a transparent jab at Kristina Shirley.

Even Amber realized that she’d gone too far on camera, and added: “ridiculous way to speak, I’m sorry.”

Credit where credit is due — Amber did catch herself and apologize, at least to the producer.

That is growth, and not the first bit of growth that Amber has shown.

But you only need to follow Amber’s story to know that it’s still not as much growth as she needs to show.

What follows is a montage of glimpses at how a rift has grown between Amber and Leah.

Leah is old enough now to realize the many ways in which Amber has failed her.

Time and time again, however, it seems like Amber still doesn’t realize that — and is eager to blame others instead of looking inward.

Amber notes that she has been in therapy for six years.

She wants to do therapy with Leah, and is convinced that it would help them repair (or build) their bond.

“We talked about therapy and stuff with Leah,” Amber shared.

Amber opined: “Therapy is a good thing to get you and your mother back together.”

“Having that mediator can help get her to open up and understand a bit,” Amber insisted.

The way that she is framing this makes her intentions so, so painfully obvious.

“I think she’ll be happier in life,” Amber added.

Amber said that Leah will be happier “when it comes to understand a bit more of what the past was.”

She continued: “where things happen today and how I am today.”

“And,” Amber added, “that it’s okay to have a mom that’s been through these things and you shouldn’t be ashamed of that.”

“Therapy is something that needs to happen,” Amber insisted.

“But,” she lamented, “there’s nothing I can do about it because he does have the primary custody of her.”

Amber declared: “I want my daughter back.”

“How can I encourage Leah to do something she doesn’t wanna do,” Gary asked, “if her mom’s not doing what she needs to do?”

“Leah’s 12. She’s not gonna get back the years she missed,” Gary accurately noted.

“If there’s gonna be any kind of reuniting,” he suggested.

Gary went on: “It’s gonna have to be like, ‘Hey, Amber’s really dug deep and really done what she needed to do to be the mother she needs to be.'”

Gary affirmed: “I want to protect Leah, I want to make sure she’s not gonna get hurt.”

Therapy is a wonderful tool for so many reasons.

It’s not a gambit to hypnotize your child into forgiving the unforgivable. No responsible therapist would even try.