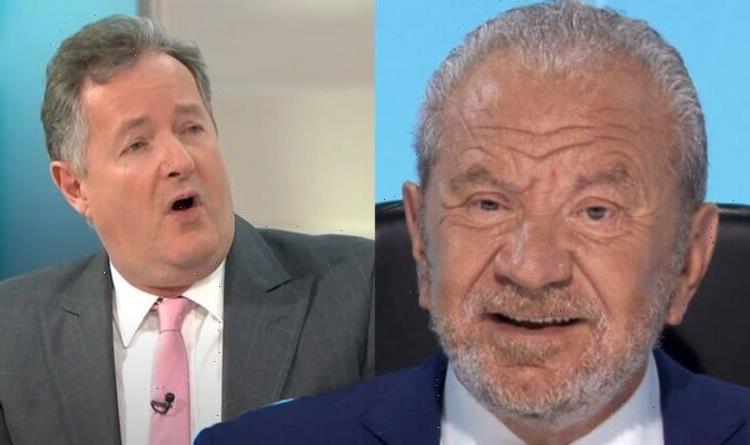 The Apprentice: Alan Sugar grills Tim Campbell in season one

Piers Morgan, 57, and Lord Alan Sugar’s, 75, feud began in 2020 when Lord Sugar hit out at Piers for his comments on the government’s handling of the pandemic. Since then the pair have added small quips to their ongoing feud with today being no different for the entrepreneur.

You are aging rapidly.

Lord Sugar shared a post to Twitter in view of his 5.2 million followers, including a picture of an owl.

The owl can be seen looking distorted and tired, with Alan captioning the post: “@piersmorgan you are aging rapidly since you walked off GMTV.”(sic)

Many social media users took to the post’s comments to laugh at the remark.

GriffDownUnder added: “Did he walk or did he flounce?”

Sticking up for Piers, Onearth2design said: “He walked off, marmite or not.

The feud began after Lord Sugar disagreed with the presenter’s comments on Good Morning Britain in 2020 over the government’s handling of the pandemic.

Piers then hit back: “If a selfish, stupid, privileged billionaire wants to spew constant repulsive abuse at someone for holding the Government to account for decisions that will decide whether people live or die, that’s a matter for him and his conscience.”

Then Piers reportedly told Lord Sugar: “Go f*** yourself,” before blocking him on social media.

The pair briefly made up in November 2021, although this didn’t last long, as in January they were back with their quips.

Piers took to Twitter to joke about his disappointment over not making the New Year’s Honours list.

He penned: “Very disappointed not to have made the honours list this year.

“After all I’ve done for this Govt, it’s baffling that they haven’t rewarded me with at least a knighthood for services to holding miserably mediocre ministers to account.”

Lord Sugar snapped back: “Knights are a very elite circle of people.

“The problem is your head is so far up in the clouds the queen would not be able to tap you with the sword, she may be tempted to ram it where the sun does not shine.

“An anagram of Sir Piers Morgan is Orgasm Inspirer.”

Since then the pair have continued to make small jokes at one another, continuing their unusual feud.