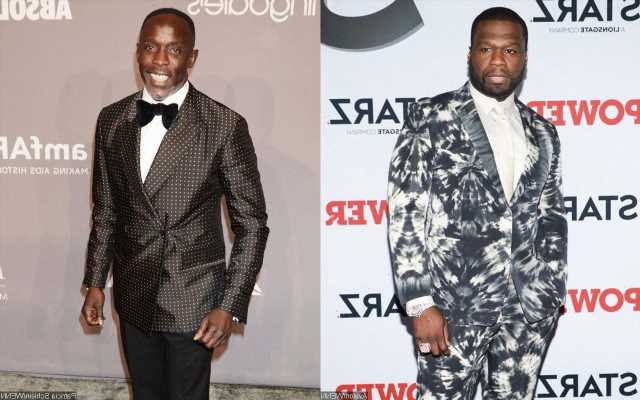 Not apologetic after he came under fire over his insensitive post in the wake of the ‘Wire’ star’s passing, the ‘Black Mafia Family’ producer once again uses the late actor to promote his show.

AceShowbiz -Not even a dead person is safe from 50 Cent‘s trolling. Having no intent to tame down his social media contents following numerous backlashes, the rapper has once again targeted Michael K. Williams with an insensitive drug joke.

On Friday, September 24, three weeks after the actor’s death, officials have unveiled Michael’s cause of death. According to the Chief Medical Examiner in NYC as reported by TMZ, he died of a fatal drug overdose. The Medical Examiner determined that acute intoxication by the combined effects of fentanyl, p-fluorofentanyl, heroin and cocaine led to his passing, with his manner of death being ruled accidental.

Apparently catching wind of this news, 50 Cent has taken to his Instagram account to mock Michael again. “Oh damn he smoked that little blue cap out of juke box bag,” he wrote in a now-deleted post, before inserting a plug for his new series “Power Book III: Raising Kanan“, “hey catch Raising Kanan this weekend.”

Social media users soon reacted to Fiddy’s post, with one shocked person commenting, “50 cent be taking it too far to promote his shows.” Another similarly said, “50 Cent so corny for these Michael K. Williams comments man.” A third blasted the actor/TV producer, “50 Cent is wrong and absolutely disgusting for what he said about Michael K Williams death.”

Earlier this month, 50 Cent also came under fire after posting insensitive comments in the wake of Michael’s passing. “Damn if you didn’t see Raising Kanan,” he wrote on Instagram along with a screenshot of a New York Post article that mentioned Michael’s possible cause of death. “check it out that fentanyl is no joke, killing the clientele. R.I.P. micheal (sic) k williams.”

50 Cent later brought up his past differences with Williams in another post. “Don’t ever try to understand me I’m different,” he explained. “I don’t do all the fake love s**t.” Fiddy later edited the caption of his initial post, but it’s not less distasteful. “New Caption alert hey jimmy ya man OD’ed,” he penned.