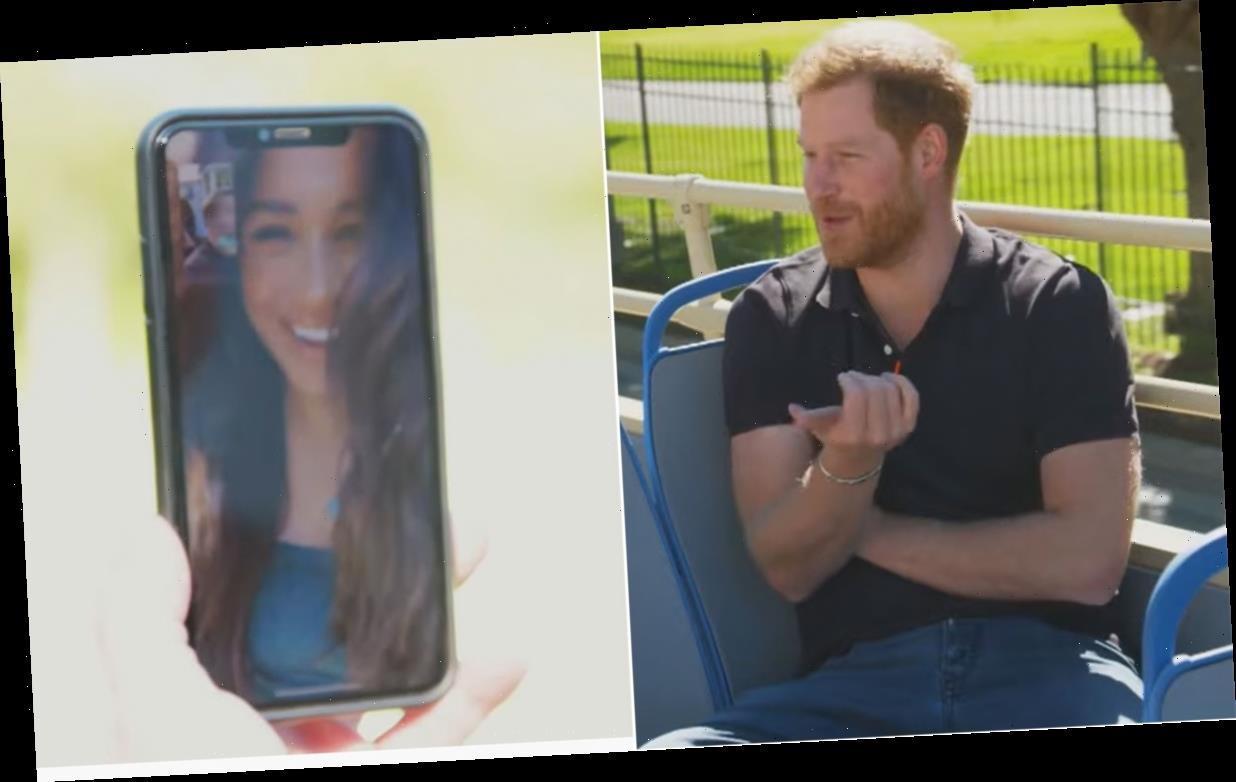 Prince Harry appeared in a fun new clip on friend James Corden‘s The Late Late Show on Thursday evening – and we learned lots of new things about his family life with wife the Duchess of Sussex and son Archie!

Prince Harry, 36, and fellow Brit James drank tea and ate scones as they toured LA on a double-decker bus – and as the pair chatted about the Prince’s new life in LA, they even got Meghan on the phone during the segment, too!

MORE: What Prince Harry and Meghan Markle’s royal wedding was really like – as told by insiders

The Queen gave Archie a waffle maker for Christmas

Prince Harry told James: “Interestingly, my grandmother asked us what Archie wanted for Christmas and Meg said a waffle maker, she sent us a waffle maker for Archie… so breakfast now, Meg makes up a beautiful organic mix, in the waffle maker, flip it, out it comes, he loves it. Archie literally wakes up in the morning and says ‘waffle’.”

“My son is now over a year and a half, he is hysterical, he’s got the most amazing personality, he’s already putting two, three words together, he’s already singing songs,” he told James when asked about fatherhood.

Harry and James enjoyed some tea on a double-decker bus!

Prince Harry has never been on an open-top bus before

When James pulled up to pick up Harry in the double-decker, Harry quickly quipped, “This is subtle, where’s the Range Rover?”

Later he added: “This is very nice… it’s the first time I’ve been on an open-top bus… not really allowed to. In London I always see them cruising around [with] tourists, and [thought] that would be really good fun because when you live in an area, you never actually go sightseeing. I’ve always wanted to go sightseeing.”

Prince Harry has never been sightseeing in LA

James asked: “Have you spent much time over in this part of LA, where we are now, since you moved here?”

Harry replied: “No, it’s been lockdown. This is the first time I’ve had a chance to see LA!”

James even FaceTimed Meghan during the video

Prince Harry takes his tea with milk and sugar

The pair enjoyed some British treats as they toured on the double-decker, with James asking Harry: “Can I interest you in tea? A little milk and sugar?”

“Yeah, put it all in,” he replied, confirming he likes a ‘splash’ of milk.

MORE: The most adorable royal baby outfits and accessories – and where you can shop for them yourself

When James joked that Harry need to pay his fare before getting on the bush, Harry quickly replied: “You know us royals, we don’t carry cash!”

Towards the end of the video, James arranges for the pair to take part in a military fitness challenge – and Prince Harry gets stuck in doing a mud crawl, speedily mastering a rope climb and a number of other impressive obstacles. Wow!

The pair took part in a military workout

James and Harry’s outing included a visit to the house used in the Fresh Prince of Bel Air for a quick a bathroom break – and the Prince impressed by rapping the first verse of the famous theme tune.

Meghan’s nickname for Harry is ‘Haz’

During a FaceTime call with the Duchess, James tried to convince her that they should purchase the mansion.

“You’d be the Fresh Princess of Bel Air,” James tells Meghan at one point. “That’s wonderful, I think we’ve done enough moving,” she replied, before asking her husband: “Haz, how’s your tour of LA going?”

A surprised James replied: “Haz? I didn’t know we were calling you that,” to which Harry cheekily responds: “Well, you’re not my wife.”

Meghan’s nickname for Harry is ‘Haz’

The royal sweetly referred to his wife as ‘Meg’ during the interview.

MORE: 20 of the royal family’s sweet and unusual nicknames revealed

The couple love to Zoom with the Queen and Prince Philip

“Both my grandparents do [know how to use zoom], we’ve zoomed a few times, they’ve seen Archie running around, but my grandfather, instead of pressing ‘leave meeting’ he just goes [gestures to closing laptop],” he said.

Prince Harry fell for Meghan on their second date

“When did you know that Meghan was the one?” James asked. “The second date, I was starting to think ‘wow this is pretty special’,” he said.

“The way we hit it off with each other, we were just so comfortable in each other’s company.”

Prince Harry opened up about dating as a royal

“Dating with me, or with any member of the royal family I guess, is kind of flipped upside down,” he said. “All the ‘dates’ become dinners, or watching the TV or chatting at home. And then eventually once you become a couple, then you venture out to dinners, or the cinema and everything else.

“So everything was done back to front with us. We got to spend an enormous amount of time just the two of us, rather than going to friends’ houses or out for dinner where there were other distractions. There were no distractions, and that was an amazing thing. We went from zero to 60 in the first two months.”

Harry told James: “We do Archie’s tea, give him a bath, read him a book, put him down.”

Harry and Meghan relocated to LA in 2020

Speaking of an average night for himself and wife Meghan, Harry said: “Meg might cook a meal, we might order a takeaway, go upstairs, sit in bed, turn the TV on, watch some Jeopardy, maybe watch a little bit of Netflix.”

Prince Harry thinks The Crown is ‘loosely’ based on the truth

“It’s fictional. But it’s loosely based on the truth,” he said.

“Of course it’s not strictly accurate, but loosely… it gives you a rough idea about that lifestyle and what the pressures of putting duty and service above family and everything else – what can come from that.”

“Daniel Lewis… Damien Lewis!” the royal corrected himself. James then joked: “I think Damien Lewis as you, and me as William – that’s casting.”

“It’s not great casting, but it is casting,” Harry quipped.